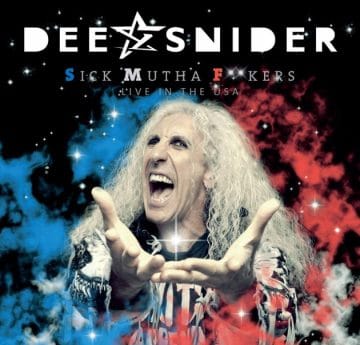 Review:
Long before Twisted Sister started flooding the market with their live albums — they’ve released a live album every couple of years pretty much since 2002 — a gem was bestowed upon us by Twisted Sister frontman Dee Snider in 1997. The album was called Twisted Forever SMFs Live by Dee Snider’s Sick Mutha F**kers. Why aren’t you talking about Snider‘s latest live release Sick Mutha F**kers Live In The USA you may ask? Well, simply because they are actually the same album with Twisted Forever SMFs Live repackaged in a splashier model titled Sick Mutha F**kers Live In The USA this time around.

I still remember how excited I was when I stumbled onto the Twisted Forever SMFs Live album. It was in the very early 2000s before the birth of Sleaze Roxx and the internet had really caught on. I remember my boss at the time asking me, “Olivier, have you ever heard of Google?” I used to work in downtown Toronto and every month or so, I would make the rather long walk (perhaps 20 minutes) along the infamous Yonge Street past Toronto’s flagship mall, the Eaton Centre, all the way to the multi-storey HMV store, which was right beside what was likely the world’s largest Sam The Record Man store. Still listening to my bands from the ’80s, I would go through my favourite artists’ CDs in the “Heavy Metal” section hoping for an album that I might want to purchase. Even though my Twisted Sister collection was already complete, I couldn’t resist going through the Twisted Sister CDs in the store and to my shock, I noticed a CD that I had never seen or heard of before — Twisted Forever SMFs Live by Dee Snider’s Sick Mutha F**kers. I flipped over the rather unimpressive cover to take a look at the track list and was instantly sold by the medley of four Come Out And Play tracks and “Wake Up (The Sleeping Giant)” from 1987’s Love Is For Suckers album. No need to say that I immediately purchased the record that day.

I have absolutely loved Twisted Forever SMFs Live and so much so that I bought Dee Snider‘s album Sick Mutha F**kers Live In The USA even though I knew full well that it was the exact same release musical content wise. First of all, the album is very special because it contains the only live renditions of the tracks “Be Chrool To Your Scuel” (in the medley) from Come Out And Play and “Wake Up “The Sleeping Giant)” from Love Is For Suckers. Unfortunately but understandably, most Twisted Sister live releases have many of the same songs over and over again but Snider‘s only live album (I consider Twisted Forever SMFs Live and Sick Mutha F**krs Live in The USA to be the same record) contains those two gems. I wish that Snider would have played even more songs from those two underrated Twisted Sister albums but as the singer advised the crowd, he and his band had less time than anticipated to play so would pack in as much as they could in the time that they had. Obviously, there are many tracks that Twisted Sister fans would expect from Snider and he of course delivers on that count with “The Kids Are Back,” “Stay Hungry,” “Burn In Hell” and “Under The Blade” (which Snider describes as the first track he’s ever written) as well as the true classics “You Can’t Stop Rock ‘N’ Roll” and “The Price” and of course the hit singles “I Wanna Rock” and “We’re Not Gonna Take It.”

Although “Leader Of The Pack” always seems to be included in late ’70s / early ’80s Twisted Sister live releases, Snider‘s live album is the only one that has the track played live after it was changed somewhat and re-released on Come Out And Play in 1986. One of the best parts on Sick Mutha F**kers Live In The USA are Snider‘s entertaining rants, which are different than what you get on any other Twisted Sister releases. I won’t bother repeating what Snider states to the crowd but he definitely still has a lot of fire in 1995. At least this time, we don’t actually have a song title for a Snider rant like you can find on future Twisted Sister live releases like Live At The Marquee. It really feels like Snider and his unheralded backing band are playing rather small clubs as at one point, Snider tells someone to get the beer off the stage. Speaking of Snider‘s backing band, they aren’t Twisted Sister but they do a fine job of bringing that Twisted Sister intensity with their playing and if I didn’t know any better, I would have thought this was a Twisted Sister record.

Overall, Twisted Forever SMFs Live and now Sick Mutha F**kers Live In The USA remains one of my favorite live albums of all-time and I can’t recommend it enough. I know Snider is essentially doing a money grab with Sick Mutha F**kers Live In The USA but I love the record so much that if Snider repackaged the album one more time, odds are that I would be buying it again!

Dee Snider‘s “We’re Not Gonna Take It” (from Sick Mutha F**kers Live In The USA):