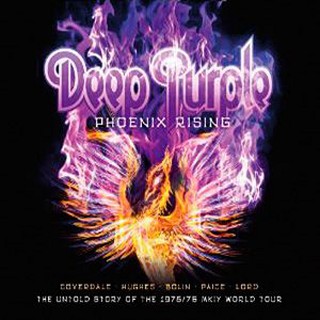 Review:
If you don’t have a clue who Deep Purple are you should leave this site right now. Anyone who considers him or herself a ‘classic rock fan’ should have Deep Purple records in their collection. This is preaching to the choir I know, but the band’s influence is heard in the hard rock and heavy metal of today and in rock music from the past 30 years for that matter.

Of course people know songs such as “Smoke On The Water”, “Lazy”, “Highway Star”, Woman From Tokyo” and “Hush” — all of which are Ritchie Blackmore era cuts — and represent what the casual listener is familiar with. So when I heard that there was a DVD release of Deep Purple ‘Mark IV’ I was thrilled. The Tommy Bolin, Glenn Hughes and David Coverdale era of the band was loaded with talent — and frankly they had their work cut out for them, just look at who they replaced, Blackmore, Roger Glover and Ian Gillian. Those are huge shoes to fill, but they towed the line and did so rather successfully.

Billed as a documentary, Phoenix Rising is more of an extended interview timeline — and a dry one at that. There isn’t a narrator, and the film features interviews with Glenn Hughes and Jon Lord — that’s it! There is no David Coverdale to be found and no Ian Paice anywhere — that’s an incredible omission. However I really have to hand it to Glenn Hughes who single handedly saved this DVD from becoming a complete disaster. His ability to tell a story makes all the difference.

The documentary is good, informative and insightful — but sadly has a limited audience. In addition there is the inclusion of live footage which is a treat for ‘Mark IV’ fans, but once again, it’s for die-hard fans only. Another bonus is that Phoenix Rising gave me a better insight into the Jakarta incident and the last days of the great Tommy Bolin. Eagle Entertainment have also issued a deluxe edition of Phoenix Rising that features a bonus CD of live audio from the ‘Mark IV’ era and a deluxe booklet with additional liner notes.