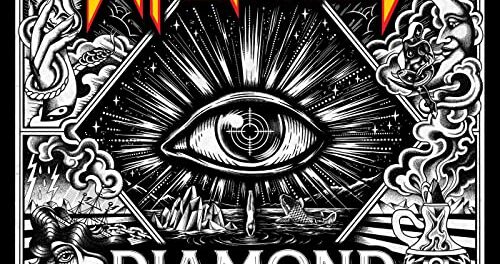 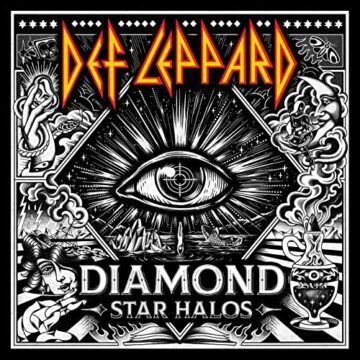 Diamond Star Halos is the title of Def Leppard’s 12th studio album and the seventh by the current incarnation featuring vocalist Joe Elliott, bassist Rick Savage, drummer Rick Allen, and guitarists Phil Collen and Vivian Campbell. The title was lifted from one of their influences —Marc Bolan’s T. Rex’s signature tune “Get It On” — and for those music nerds it was retitled in the United States as “Bang A Gong [Get It On].” Joe Elliott and company promised a Leppard album that would lean heavily on their love of 70’s glam-rock. You can hear the aforementioned on the “Kick” and “Fire It Up,” but they’re not breaking new ground as these songs sound like Def Leppard post Pyromania.

Much like the band’s 2015 self-titled album, Collen and Elliott provide the bulk of the material that made it into the record. Rick Savage gets a few songwriting credits within, but the heavy lifting is done by Collen and Elliott. If you’re hoping for some old school riff and blazing guitar work, you’ll be disappointed. The lack of input by Vivian Campbell is surprising. He’s currently in remission from cancer and he’s been actively gigging, and recording with his side project Last In Line. He’s certainly capable and on the mend. So what’s up? Well, perhaps Vivian is holding those riffs and song ideas for Last In Line? And don’t get me started on Rick Allen not being featured on the album…

I like Diamond Star Halos more than 2015’s Def Leppard, or 2008’s Songs From The Sparkle Lounge. I think combined I would have been hard pressed to list five good tunes between them. Diamond Star Halos suffers from too much material. There’s 15 songs on the standard pressing and 17 on a deluxe ‘big box’ store edition. In 2022, people have the attention of a fly. They want something short and concise, neither of which could be used to describe Diamond Star Halos. The standouts on the album are “Take What You Want,” “Kick,” “Fire It Up,” “SOS Emergency,” “Unbreakable,” and “From Here To Eternity” which is a departure from anything Leppard have done in the past. It’s a trippy, epic tune that aligns itself more with the world of Pink Floyd than The Sweet, Slade or T.Rex.

It should be noted that country-folk singer Alison Krauss handles lead vocals on “This Guitar” and “Lifeless.” Neither do much for me, but there’s an audience for fluff like this. And what would a Def Leppard album be without some sappy, hooky, catchy ballads? Well, here you get “Goodbye For Good This Time” and “Angels (Can’t Help You Now)” and I’m sure that will have the soccer moms and their moms revisiting those over and over again.

Diamond Star Halos has been in the making for two years. It’s somewhat disjointed, it’s much too long and it’s not much of a ‘band effort’ in terms of the songwriting. The truth is Def Leppard has done worse. They can’t recreate either the On Through The Night and High ‘n’ Dry or the Pyromania and Hysteria eras. The ship as they say has sailed. Diamond Star Halos is a ‘respectable’ effort released predictably, right in time for the launch of The Stadium Tour.

Reviewed by Ruben Mosqueda for Sleaze Roxx, May 2022

Def Leppard‘s “Fire It Up” video: