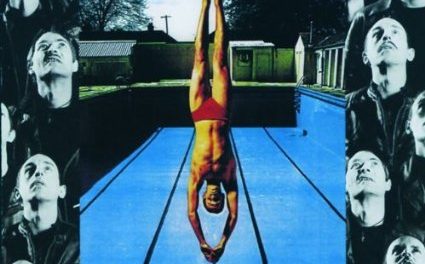 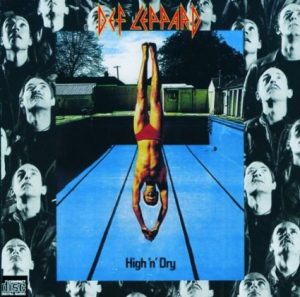 Review by Deke:
Summer of 1981 was the year I discovered both Iron Maiden and Def Leppard. One day, I went to buy one record and it came down to a new band choice. One record that I had to decide on and I went with was Maiden that day and I purchased Killers. Shortly after, I left home and came back with Def Leppard‘s High ‘n’ Dry release!

Thirty five years later, I’m gonna focus on Def Leppard and man what a cooker of an album High ‘n’ Dry was and still is! I remember reading Kerrang and Creem Metal Magazine back then and they were into this New Wave Of British Heavy Metal scene that was happening over in England so I guess I was somewhat part of that new metal scene over here in Canada. Def Leppard by album number two had enlisted Mutt Lange the one who had twiddled the dials on the last three AC/DC albums (Highway To Hell, Back In Black and For Those About To Rock) so here he is, as a producer working with the young upstarts in Def Leppard. Thirty five years later and this record sounds like it could have come out last week. The sonics, songwriting and overall delivery of High ‘n’ Dry is a must have in any hard rock collection…

Let me tell ya what all the fuss was about…

“Let It Go” — No punches pulled. Here’s Def Leppard in 1981 ready to do battle and the guitars courtesy of Pete Willis and Steve Clark (R.I.P.) set the tone. Joe Elliott‘s vocals are almost like a clean version of Brian Johnson from AC/DC. Actually, this song could have been AC/DC as it’s a slick piece of well put together hard rock and man it’s only track one!

“Another Hit And Run” — This track continues the pace set by “Let It Go.” This song just flat out rocks and man Def Leppard are a band to contend with. Def Leppard will hit ya and they will run right over you! The two solos in this song are wickedly good and the Clark/Willis combo are right up there with Smith/Murray from Maiden at this point !

“High ‘n’ Dry” — The title track and Joe‘s stumbling around being wasted all day! Dude pulls the vocals off convincingly on this whole album. This is hard rock 101 at its finest! Love the drum sound courtesy of Rick Allen.

“Bringin’ On The Heartbreak”– I don’t think Def Leppard knew at the time they were composing the first big heavy rock power ballad in 1981 but they were. This is no sap from the tap! The drums move it along during the pre chorus into the chorus and the guitars take over! For me, after all these years, I can hear the influence of Mutt Lange that would come after on their recorded works. But back then, all that mattered to me was that this song wasn’t Journey like!

“Switch 625” — This song ends side one with Willis and Clark soloing and jamming out while Joe takes a breather during this musical diversion! Whew side one ends with a loud boot up the rear!

“You Got Me Runnin'” — This is my fav tune off High ‘n’ Dry. I have no idea if they ever played it live but man what a great tune. Well written. The guitar work just shines on this tune! Super well done chorus along with a fantastic guitar solo almost AC/DC like. If “You Got Me Runnin'” does make you wanna rock out, nothing will!

“Lady Strange” — This song just keeps the party going. I am really just glad they never made a video for this back then ’cause it would have been beyond cheese ball! Why? I have no idea but I’m just glad they didn’t! This song is number seven and it’s full out balls to the walls so far! Another well written track.

“On Through The Night” — Wow! The debut album was called this and now the follow-up has the title track to the debut! Cool all out rocker. The solo by Clark is deadly and you know what after his passing (1991), this band was never the same again. Even Willis leaving — you could make a case for! Look at the co-writes on this album and Pyromania and Willis is a pretty big damn contributor that always gets left out of the Def Leppard talk! It’s a shame really!

“Mirror Mirror (Look Into My Eyes)” — It’s cool they brought this tune back a few years ago to play live. It was a good rock track with some excellent musicianship in it as well! Always dug how the chorus just builds and builds.

“No No No” — This track stomps the album to a close and makes you want more and more and well, the answer for right now is “No No No.” This song just boots the door wide open once more before slamming it shut! Holy hell! I love High ‘n’ Dry! Of course, the song ends and Elliott says “no” — I think 48 times is it? Who knows? I probably got confused and lost count! Math and counting was never my forte in high school but rock was!

In conclusion, this is an all-time classic which for me I would have to say is right next to Pyromania in their best work! They hit one out of the ball park here and made us believers until Pyromania kicked it universally everywhere for them! They were never the same after High ‘n’ Dry and of course they gave Pete Willis the boot and out went a big clog of talent. Of course, Mutt Lange really took the reins over after High ‘n’ Dry but I kinda wish he would just chilled back a bit — kinda like the role he had on this one and the AC/DC albums. But I think Def Leppard in 2014 would not agree with me.

Review by Metal Headz Media:
Thirty five years ago, Def Leppard released their second studio album, High ‘n’ Dry. It was the first of four albums produced by Robert John “Mutt” Lange. He also had a hand in helping them define their writing style and the classic “Def Leppard” sound we know today. This album would also be the second to feature Joe Elliott (vocals), Rick Savage (bass), Rick Allen (drums) along with Steve Clark and Pete Willis (lead and rhythm guitars), which were the five original members. This would be Pete Willis‘ last full-time album with the band.

High ‘n’ Dry peaked at #38 on the Billboard Top 200 and was reissued in 1984, following the success of Pyromania. The remixed single “Bringin’ On the Heartbreak” hit #61 on the Billboard Hot 100 that year as well. The song “High ‘n’ Dry (Saturday Night)” also ranked #33 on VH1’s 40 Greatest Metal Songs and in 1992, the album reached double platinum status.

The fans have shown by the number of albums sold, that Hysteria is Def Leppard’s most popular album with Pyromania not far behind. As for myself, I favor High ‘n’ Dry over those two. I love the raw sound it had, from the crunchy guitar intro of “High ‘n’ Dry (Saturday Night)” and the melodic dual guitars of “Bringin’ On the Heartbreak” to the epic instumental “Switch 625.” I still find myself listening to this album beginning to end. They were still five musicians finding themselves in the music world before the record company got a hold of them and overproduced their sound. I still love the other albums I mentioned, along with a couple others in their catalog; but if someone asks me to play some Def Leppard, High ‘n’ Dry is my go to album for sure.

Def Leppard‘s “Me And My Wine” video: