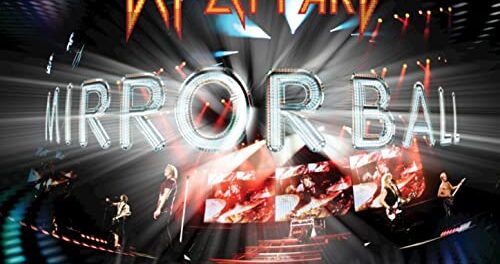 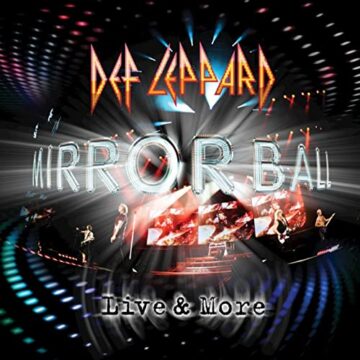 Review:
Mirror Ball – Live & More seems to be aimed at the casual fan more familiar with the big hit albums, Pyromania, and Hysteria. Of the 24 live tracks, half appeared on either Pyromania (six) or Hysteria (six), the two biggest-selling albums for Def Leppard. The pre-Pyromania years receive a pair of tracks from High ‘n’ Dry (1981). Debut album On Through the Night (1980) gets passed over probably due to a lack of big hits and radio songs.

At one point, bands followed more of a model of heavily loading the setlist with tracks from their current or upcoming album. The previous album became the second source most drawn upon. Previous hits would fill in the rest. That was also when tours were promotional vehicles for albums, which were what actually made money in those days. Now, when the money model is reversed and albums are promotional vehicles for tours and/or a way to signal that the band is still making music, tours tend to feature what the fans want to hear rather than what a band wants fans to want (and buy). Mirror Ball demonstrates that Def Leppard clearly understand this.

Based on Mirror Ball, the mid-’90s to early-’00s era represented by Slang (1996), Euphoria (1999), and X (2002) does not exist as those three records are completely ignored. In fact, after the two songs from Adrenalize (1992), the follow up to Hysteria, Retroactive (1993) gets two entries and covers album Yeah! (2006) has one. Def Leppard season the setlist with three songs from their then-current album, Songs From The Sparkle Lounge (2008), which is just enough to give fans a fair taste without pushing the record on them.

Those who tuned out after Hysteria or maybe Adrenalize and are looking for more of a classic setlist, will be satisfied. However, if you feel like the Def Leppard catalog really begins with Slang, you won’t find as much here. The newer tracks may not make too many people search out Def Leppard’s more recent albums, but they also sit comfortably in the setlist creating neither excitement nor giving offense.

Until Mirror Ball, Def Leppard had been fairly conservative releasing live material and much of that has been archival.  Appearing first on VHS and later on DVD and CD, Live: In the Round, In Your Face (1989) comes from several live concerts during the Hysteria tour. A 1983 show was released on the Pyromania deluxe edition in 2009 and some live tracks from the ’90s came with the 2009 deluxe edition of Adrenalize. Though various articles and interviews state Mirror Ball is the band’s first live album, that isn’t entirely accurate. However, Mirror Ball is their first live album in a long time, and, at the time it was released, the only one that provided a recent live recording of Def Leppard.

So how does it sound? It’s a trade-off. Recording technology has gotten better in the 20 years between In the Round and Mirror Ball, but the band is also 20 years older and you can hear that in places — though In the Round is not flawless. As if most often the case with bands that have been going for decades, the vocals are where the high mileage is most obvious. However, it’s worth keeping in mind what Paul Stanley said in 2018: “If you want to hear me sound like I did on Alive! [1975], then put on Alive!”  Everyone changes at some point. Joe Elliott sounds fine in the mid-range. He can reach the higher places, but when he stays there, his voice sometimes becomes a little sandy. “Photograph” stands out in this way, though it’s an overall good track to listen to on Mirror Ball. On other tracks such as “Pour Some Sugar On Me,” the whole band, including Elliott, sounds closer to their 1980s heyday. He doesn’t sound like he’s getting much, if any, help from vocal effects. I respect them for releasing — as best I can tell — a truthful record of their live sound that doesn’t sound like it was extensively touched up or reworked later in the studio, which defeats the whole point of a live album. The first page of the booklet clearly states that songs were “recorded at various points around the world,” so this is a composite concert than a single concert. I think that’s okay.

Most of the arrangements stay pretty close to their studio counterparts, but we do get little extensions, bursts of notes, and so forth from the band. Nothing sounds radically altered. Even “Bringin’ On The Heartbreak,” which spends its first half in an acoustic form before breaking out the electric guitars is unmistakable. Whatever songs you liked before, you will still like on Mirror Ball. Whatever you songs you didn’t like before, Mirror Ball will probably not change your opinion of. For example, I bought Adrenalize — on cassette tape! — within a month of its release and lyrics such as “Make love. Like a man. I’m a man.  That’s what I am” sound just as awful to me now as they first did. I would greatly preferred, for example, “White Lightning” in its place, but that wasn’t a hit. The superb “Switch 625” wasn’t a hit or a single either, but it gives Elliott a break.

If you have wondered what might be beneath some of that polish and varnish that peaked with Hysteria, Mirror Ball shows you a bit more of a meat and potatoes version of Def Leppard. Stripped of the studio lacquer and roughened by time, a heavier Def Leppard emerges live. In fact, I wasn’t too interested in this album until one of its tracks came on the radio. The harder, tougher version of the band I was hearing recalls the High ‘n’ Dry / Pyromania era.

The three new studio tracks give me mixed feelings. Listening to them directly after the live portion of Mirror Ball highlights the differences between Def Leppard as studio band versus Def Leppard as a live act. Lead track “Undefeated” is definitely the pump-you-up anthem. It might have been a hit in the ’80s. “Kings of The World,” has a strong Queen influence from the lead vocals, to the vocal harmonies, to the vocal effects, to the lyrics, to the guitars, to the chorus. Even the title sounds like Queen.  Compare the title “Kings of The World” to Queen’s “Princes of The Universe.” The beginning reminds me of the piano and vocal intro to “Bohemian Rhapsody.” In short, it’s like Def Leppard set out to write a Queen track. It works, but you might enjoy it most if you think of it as an experiment. The mid-tempo “It’s All About Believin’” strikes me as saccharine and is the weakest song, sounding like material from the mixed results of Adrenalize when Def Leppard decided to emphasize the pop in their pop rock sound.

The DVD contains music videos for two tracks on Songs From The Sparkle Lounge, behind the scenes footage, some live songs, and other scenes. I appreciate the neat, organized menu that makes it easy to find specific songs, sections, or scenes from the DVD.  I watched it all, and the live songs did the most for me.

I am satisfied, happy in places, with Mirror Ball. Now that I’ve started investigating Def Leppard’s live releases, I want to check out the live Viva!  Hysteria released a couple of years after Mirror Ball. Although it doesn’t make me any more interested in their recent studio work and probably doesn’t make many lists of all-time best live records, Mirror Ball is good/great and it makes me want to seek out some more of their work — live, at least — which is one of the best things I can say about any band.

DVD
Behind the scenes on the Sparkle Lounge Tour 2008–2009 including live performances of
Rock! Rock! (Till You Drop)
Armageddon It
Pour Some Sugar On Me
Hysteria