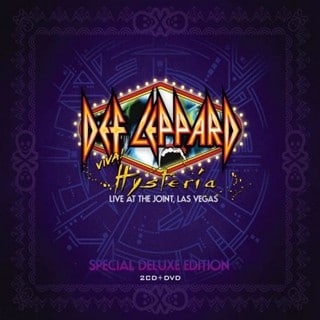 Review:
I have always had a love/hate relationship with Def Leppard. I love the British band’s High ‘N’ Dry and Pyromania albums but Hysteria was a huge shock to my system when it came out in 1987 and it took me a long time to fully appreciate that album. If it wasn’t for the song “Pour Some Sugar On Me”, I doubt that I would have ever really got into that album. I have hated, to some extent, just about everything that Def Leppard has put out since Hysteria — aside from a few songs here and there — as the group has really become a pop-rock band rather than the hard rockers they once were.

Even though I surprisingly consider the show that I saw from Def Leppard‘s ‘Hysteria Tour’ as one of the top concerts that I have ever seen (perhaps a future Retro Concert Review should be in the works), I have routinely looked down upon the Hysteria album and anything after that, and never saw the band in concert again. The few Def Leppard CDs that I have bought since that concert I attended back in 1988 — namely Adrenalize, Yeah! and Mirrorball — have been, for the most part, disappointing.

For that reason I had no intention of purchasing Viva! Hysteria despite knowing full well about its impending release. When I came across it at a local Wal-Mart store, I came close to buying it after seeing the track listing for the second CD — which had some older Def Leppard classics such as “Good Morning Freedom”, “Wasted” and “Rock Brigade”. However, getting the other live CD of the band playing the complete Hysteria album was not enticing at all. Given the way that the tracks are listed on the back of Viva! Hysteria, and my quick glance at the backside, I thought the DVD footage was only of the Hysteria set that the band had played. Accordingly, I elected not to buy the DVD that day, but I did eventually purchase it the next time I went to the store.

The first CD that I played from Viva! Hysteria was of course the second one with the old school Def Leppard tunes including “Good Morning Freedom” and seven of the ten tracks from High ‘N’ Dry, including my personal favorite “Let It Go”. While I purchased Viva! Hysteria as a result of that second CD, the biggest surprise to me is how much I have been enjoying listening to and viewing the DVD of the band playing the entire Hysteria album. I had forgotten how good some of those tracks are, including “Run Riot” and “Excitable” (both of which I had not heard in probably 20 years), as well as “Women”, “Animal”, the verses to “Gods Of War” and of course “Pour Some Sugar On Me”. There are of course some songs that I still can’t get into including “Love Bites” and — depending on the day — “Hysteria”. And sure, lead singer Joe Elliott‘s voice is certainly not as good as back in the ’80s, but he can still hit most of the key notes at an adequate level.

The second biggest surprise for me is that the DVD contains live footage of the songs that are contained on that second CD of mostly vintage era Def Leppard. What I did not realize is that during the band’s Las Vegas stint where Hysteria was played in its entirety, the opening band was the best Def Leppard cover band of all time — Ded Flatbird — which was essentially the band members impersonating themselves through their alter egos. As to be expected, Ded Flatbird did an admirable job in warming up the crowd for the headliner.

Viva! Hysteria is a great way for Def Leppard fans to rediscover — if you have forgotten like me — the magic of Hysteria and just how different and groundbreaking that album was when it first came out. Oddly enough, Viva! Hysteria has half of the same songs contained on Mirrorball but I have hardly listened to that album — I think that Viva! Hysteria will, in the long run, surely not suffer the same predicament.