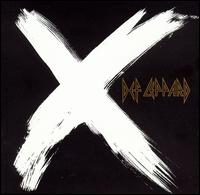 Review:
I have had mixed feelings about even buying this album for a year now. A rock station that I trust said it is far too wimpy for Def Leppard. Another rock station that sells out at every opportunity to bring in the more “hip” listeners said it was a great album. I tend to stick by the word of those I trust, but when the first choice of radio stations played something terrible like Audioslave or went to commercial, I flipped over to the secondary choice and heard “Four Letter Word”.

So, I decided to bite the bullet and pick up X. I popped it in and checked the case after a few seconds because it sure did not sound like the Def Leppard I know and love. It is wimpy and it definitely sounds to me like they were doing all they can to get on the pop charts.

That’s not to say the songs aren’t great. A few of them really come to mind such as “Girl Like You”, “Scar”, and “Long Long Way To Go”. Fantastic songs, but they just don’t compare to the Def Leppard of old.

If the entire album were like “Four Letter Word”, a rocking album with no attempt to appeal to the 10-year-old girl audience, I’d give it five stars. But, it doesn’t deserve five stars. Not until they prove they are true to their fans that want to hear ROCK music, not bubble gum pop, will I give a new Def Leppard record five stars.

Do I feel ripped off? Not really. I like the record, but I don’t love it. I’m slightly disappointed. I expected a new great rock album and instead I heard a few songs that could have passed for N Sync. What is up with that? I won’t go as far as to call this a sell out album, but I will say that “Four Letter Word” is by far the best song on the album. But, if you hear “Four Letter Word” on the radio and think, “Wow, Def Leppard can still rock out,” don’t be sucked in. They try too hard to appeal to the wrong audience on this album and nothing but “Four Letter Word” resembles the Def Leppard I’ve known and still love.