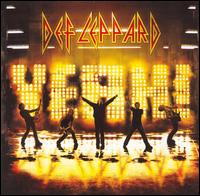 Review:
Def Leppard‘s new album has finally been released. Dedicated fans have searched and known about this album for a few years now, with Def Leppard themselves teasing them with a taste of the new songs like “Waterloo Sunset” and “No Matter What” at the shows as well as on the two previous greatest hits albums; Rock Of Ages and Best Of, which had one of the songs on each version of the second helping of greatest hits.

Finally after waiting for the new album it is out. The CD is a covers album that pays honor and tribute to the bands that Def Leppard grew up on and that influenced their playing. Songs from Mott The Hoople, David Bowie, The Faces and Thin Lizzy, among others, are featured on this album.

All the members of the band jumped in on bringing back the songs that they heard back in the 60’s and 70’s that started their journey into rock and roll. Vivian Campbell (guitar) and Phil Collen (guitar) both take on vocals, giving Joe Elliott a chance to explore and try out different aspects of the band.

Each song on the album was a hit back when it was first released and is sure to be a hit again with Def Leppard putting their own little twist on each song and bringing them back alive again for a new generation of fans. Each song has something special added to it, “Golden Age Of Rock ‘N’ Roll” has the original lead singer Ian Hunter doing the introduction to the song. “Stay With Me”, The Faces classic that has had continued success through the years, is also part of the album. On that song the lyrics are all from the lead guitar player Phil Collen, with a voice that is perfect for the song, sounds like you are seeing and hearing The Faces live.

The album is a great collection of music that led the band to their reality. The songs are a part of history and although they don’t sound like Def Leppard, its part of what Def Leppard is. Keeping with the unique and creative side to their music, this album is nothing short of what is expected out of the band.