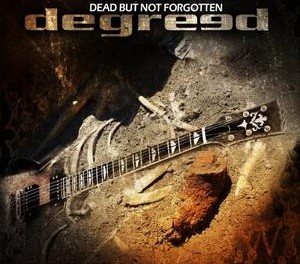 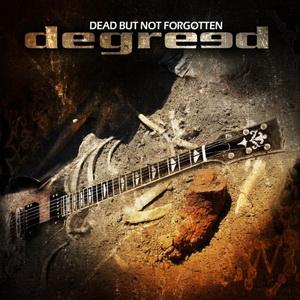 DEAD BUT NOT FORGOTTEN
Released on June 19, 2015 (Sun Hill Production)

Review:
I’ve heard from Degreed a few times before as being a prominent band among the so called New Wave of Swedish Hard/Melodic Rock Era, but had never actually heard anything from them until this album. And so when I found myself browsing new releases as I often do, I decided to get their new effort Dead But Not Forgotten and give them a chance; after all that’s the way to uncover new bands.

The first thing that I have to say is that I could never write a conscientious review by listening to a record only once or twice. I often find that my impressions and opinion of an album often change from the first listen to the, let’s say, tenth — sometimes slightly and other times, radically. So even though this one has been out for a month now, it has only been in my hands for a couple of weeks and in that time, I’ve given it at least a dozen spins.

That takes me to the second thing which is that I have a very wide taste in music, mainly among the rock/metal genre, but still. In fact, this is often a source of conversation and debate between Sleaze Roxx’s new editor Olivier and I — he’s a purist as opposed to myself. To better explain, these are some albums I often listen to on different ends of that spectrum such as Pride of Lions’ Immortal, which is way too mellow for most hard rock fans; and on the other extreme, Opeth’s Blackwater Park that may be considered too heavy; and Magic Pie’s The Suffering Joy that could be too progressive and mellow.

The point of saying all this is to illustrate that I can dig some AOR, melodic, hard, or progressive elements in my music. So imagine my surprise at the fact that even though the musicianship on this album and its end result are of good technical quality, I found the music on Dead But Not Forgotten to be neither of these.

What I encountered was a heavy pop influence. I’m sorry for saying this, but songs like “Love Me, Love Me Not” sound like a slightly heavier version of pop band Savage Garden (yes, I know…I shouldn’t even be able to do make that comparison, but blame it on girlfriends from the past).  More often than not, the arrangements and lyrics sound like something you could hear these days on MTV as for example the song “Firefly”.

The only thing I enjoyed throughout the entire album were Robin Ericsson’s vocals. Degreed do have an asset in him. With great bands like H.E.A.T., Eclipse, Crazy Lixx and The Poodles coming out of Sweden and delivering the goods, I honestly don’t see the appeal of Degreed unless you’re into pop rock.