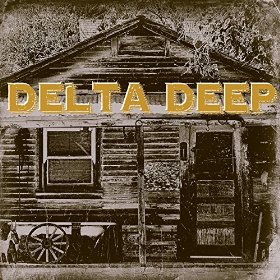 Review:
With guitarist Phil Collen having stepped outside of Def Leppard in recent years with Manraze, it is certainly not surprising that he has stepped away from Leppard long enough to record a new album. What will surprise fans is the direction of the new project. Delta Deep is a ‘blues/rock’ record; it’s not entirely a traditional ‘blues’ record — it’s more contemporary.

Joining Collen in Delta Deep is bassist Robert De Leo, drummer Forrest Robinson and singer Debbi Blackwell-Cook. The music is soulful, bluesy at times rocking and definitely memorable. De Leo and Robinson make for a ferocious rhythm section throughout the entire album and Blackwell-Cook is a powerhouse vocalist; though she doesn’t over sing — which art of restraint in itself is a talent. Collen himself lends some excellent background and co-lead vocals all over the recording. It’s his guitar tone that is the weak link on this album. It sounds like a Caucasian not well versed in the blues playing through a hard rock rig and through a stratocaster. It ruins the vibe and is sonically disingenuous.

The highlights on the album are: the opener “Bang The Lid” if you ever wondered what Def Leppard vocals over a blues track would sounds like — this is it, “Down In The Delta” which is somewhat cliché lyrically, “Treat Her Like Candy,” “Private Number” which is a duet with David Coverdale and Blackwell-Cook that has fabulous results, and the cover of Deep Purple‘s “Mistreated” with guest vocals by none other than Def Leppard singer Joe Elliott.

As far as side projects go, Delta Deep is interesting at best and predicable at worst. Delta Deep will undoubtedly draw some attention from the Leppard fan base; but the contemporary blues fans on the other hand — that’s anybody’s guess? Delta Deep fared much better than bandmate Vivian Campbell did on his ‘blues’ outing Two Sides Of If a number of years ago.

DELTA DEEP “Down In The Delta” (Lyric Video)