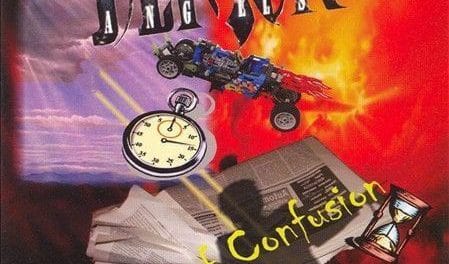 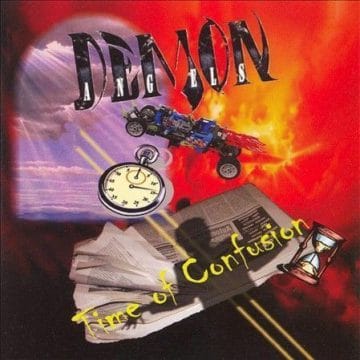 Review:
We are stuck at home here in Arizona and I have had some paperwork at work that allows me to listen to YouTube while I work. Without fail, in between episodes of Jim Cornette‘s Drive Thru, Dr. Katz Professional Therapist cartoons, and a various music playlists, a song off the new Black Swan record comes up. When it does, I go to my YouTube screen to see what it is because I’m liking it so much. After weeks of holding my wallet tight to my chest due to all the uncertainty with this COVID-19 virus pandemic, I finally relented and ordered the CD. But, it will take a few weeks to arrive… Another bonus from this pandemic! Slow mail. So, to tide me over, I went to the CD shelf and got a CD that featured Black Swan vocalist Robin McAuley. This CD is under the band name Demon Angels and the album is called Time of Confusion. Boy, how fitting!

I remember buying this CD after reading about it here on Sleaze Roxx back in the day. It came out in 2006 and I really liked what I heard. So, I went to Circuit City and bought this one. Ah, remember when brick and mortar stores had good stuff in stock? Circuit City is long gone. But, my copy of this album remains on the shelf. And, what a wonderful surprise it was when I popped it in and heard just how great it is. The album features Robin McAuley with an Italian backing band of artists I know very little about. So, I admit, I bought it because of the strength of Robin McAuley‘s voice. And damn, is it strong!

This album is full of political, current events, and overall balls. There’s a lot of great lyrics on here that I have used in rants online without realizing I sampled from this album. Very well written lyric content. “Gonna Get It” is a good opening track with a lot of power. It’s basically your angry rocker about a girl doing you wrong. At least, that is how I take it. Catchy, punchy, perfect. Up next is “Movin’ On.” I’d describe the intro as a tad wankeriffic. Loud high pitched guitars with not much to really tie it in. But, once they get down to the groove of the song, it is incredible! Robin is rocking and it has an almost Ratt Out of The Cellar vibe to it.

“Let’s Dance” is the first of the political songs. It is a celebration of sorts about the death of Saddam Hussein. “You pissed me off and I’ve had enough so I thought I might return the favor” is one of the most bad ass lines of 2006, which I realize now in 2020! Very catchy, very punchy. Perfect! “Victoria” is the first soft song. When I heard it in ’06, I thought it was fine. But, now, I really like it. It has an almost Boston styled chord progression like “Peace of Mind.” “We Be Long” is a harder edged track that flirts with a modern, at the time, sound mixed with Robin doing what Robin does. It works but it isn’t one I find I revisit much. “Freedom” is about all you can find on YouTube from this album, which is a shame. Much like “Let’s Dance”, this was social commentary. “We blame it on religion, the color of our children. We raise them up to know such things as hate.” And the chorus, “Freedom! The will to pick and choose. It’s Freedom. No, we’re not gonna lose.” “The Promise” is probably the most true to the McAuley Schenker Group sound. It’s fine. I find I like this one but I have about four cuts I go back to on the eight track CD. I also don’t go back to “Won’t Let Go” often either.

The album is solid. It isn’t a gem. It isn’t a masterpiece. Some of the songs have odd intros like “Movin’ On.” Others seem to have a rushed or an incomplete finish. But, if you are looking for a kick ass album with balls and aren’t going to nit pick, find a way to get a copy of this one.

The fact is we are in a position right now where we are finding things to amuse ourselves outside of the norm. In a sense, this whole crisis has made me more happy to have tangible copies of my music, movies, and even my own personal content. With very little to be found on YouTube, I was reminded of this album by Black Swan which is in the same realm as this album. And, because I have a physical copy, I was able to revisit it and rediscover something I probably have not played in 10 years or more. So, if you are scared or bored, or both, pick a disc off the shelf, dust off the bunnies off the jewel cases, and give something you remember liking but don’t have crammed down your throat on the radio a spin. Remember, there is a lot of great music out there that never makes air. In this case, only a little of it even made YouTube. But, it is worthy. Be safe out there, guys. And, don’t get cabin fever!