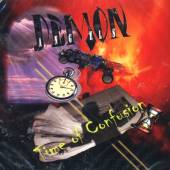 Review:
Former Michael Schenker side-kick Robin McAuley (who became the ‘M’ in MSG) has returned by teaming up with the Italian band Demon Angels. And ya know what, this sounds like MSG without Schenker‘s fancy fretwork. But that doesn’t mean guitarist Chris Falco is a dud, far from it. But he seems more concerned with groove and song structure than showing off his skills.

I don’t think I’ve listened to Robin since his appearance on MSG‘s 1991 self-titled commercial rock classic, and judging from Demon Angels, the only thing that has changed is the height of his hair. His voice sounds as good today as it did during hard rock’s reign over a decade ago. It’s as if his throat was locked safely in a chamber awaiting the right time to be unleashed again. That time is now.

Time Of Confusion is one of those CDs in which you could put every song into a hat, pull one out, and not be disappointed. OK, I lied a little – I don’t care for the final track – but that is a minor glitch on an otherwise flawless album.

From the opening full-throttle of “Gonna Get It” and “Movin’ On”, through the melodic “Victoria”, to the moody Great White like “The Promise”, this is one satisfying album. It is a mixture of tempos, memorable guitar solos and top-notch songwriting. Perris Records managed to snag a gem with the Demon Angels.

I’m not sure what Robin McAuley has been up to since the demise of MSG, and honestly I don’t care. All I know is that he is back fronting a hell of a band that managed to release a hell of an album. Some artists remember what made them famous to begin with, and Robin is obviously among those elite.