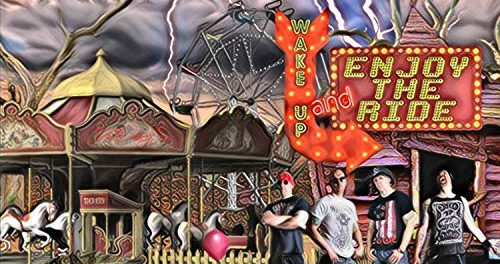 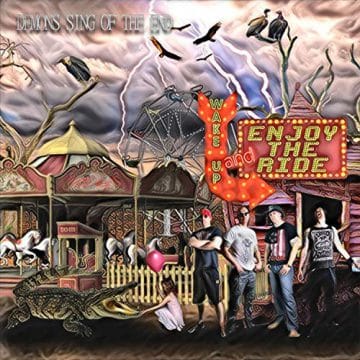 Review:
I could hardly believe my friend Rich (who moonlights as the Decibel Geek website editor and co-host of the CGCM podcast) when he told me that his favorite album of the year thus far was the one by Demons Sing Of The End. I can still recall exactly where we were when Rich delivered the news. We were about to board a bus to take us from Toronto to Montreal to catch Helloween in concert on September 12th. I was stunned by Rich‘s assessment. I hadn’t been overly impressed with Demon Sings of The End‘s debut album, nor the two songs that I had heard from the UK group’s sophomore album Wake Up And Enjoy The Ride. However, given Rich‘s glowing review, I made a mental note to make sure to give the album a couple of careful listens. I am not even sure if you could qualify Demons Sing Of The End as a band. Sure, the group’s videos depict four band members but the group, for better or worse, is clearly the brainchild of lead vocalist and guitarist Rob Lewis. In fact, Demons Sing Of The End‘s Facebook page clearly states that it “is a London based one man rock band embracing the energy of the 80s with elements of KISS, Guns N’ Roses, etc.”

The first couple of times that I listened to Wake Up And Enjoy The Ride, I could barely get through the album. It’s not that it was horrible but the songs felt quite repetitive, Lewis‘ pretty limited vocal range and tone got on my nerves after awhile, and the production seemed pretty rough. I blame this on the advent of the internet. The good news with the internet these days is that any person can record themselves playing and release a CD. The bad news with the internet these days is that any person can record themselves playing these days and release a CD. There are just way too many albums getting released these days. I remember back in the ’80s when I was discovering heavy metal and doing lists (sometimes daily — to keep busy during school classes) of my favorite bands. There might have been 30 bands that I listened to at that time. If a band wasn’t signed to a record label, odds are that it wasn’t going to be releasing an album. Now, there are tons of unsigned bands and an overabundance of sometimes great but often subpar music available to listeners. Unfortunately, quantity does not mean quality. Another big difference these days is that a band can release an album without ever playing a live gig. That was virtually unheard of back in the day. You had to earn your stripes playing live gigs until you were able to land a record deal or release an album.

I firmly believe that if it wasn’t for the internet, Demons Sing Of The End would not have had the opportunity to release one album, let alone two. At best, Demons Sing Of The End have released some demo quality songs for the world to hear.  The tracks on Demons Sing Of The End‘s Wake Up And Enjoy The Ride are really rough around the edges and would be so much better with some real professional production. The music, which is often pretty simple in terms of complexity, is the best part and on quite a few tracks such as the single “(We’re Gonna) Wake The Whole Damn Town”, there are some good riffs to build the song around. Sometimes, the guitar riffs seem borrowed or heavily influenced from other artists such as on “Sure Looks Great (Six Feet Under)” where I feel that I am listening to a Joan Jett and The Blackhearts‘ guitar riff (the name of the exact song escapes me) at the beginning of the song. The gang vocals on that song seem all over the place, and especially after having just reviewed Striker‘s latest album Play To Win, which boasted some phenomenal vocal harmonies.

Lewis‘ vocals are the sink or swim — or take it or leave it — part of the album. If you can tolerate his singing, you’ll probably enjoy the songs on Wake Up And Enjoy The Ride since the music itself is simple but enjoyable. However, I just can’t make it through the whole album listening to Lewis struggle through the songs and especially when he has to go outside his rather limited vocal range. Therefore, for me, Lewis‘ vocals sink Wake Up And Enjoy The Ride. I am still shocked that my friend Rich named this album as his favorite of the year (back in mid-September). As it turns out, I believe that Rich was talking about Demons Sing Of The End‘s debut album Take Life By Throat And Scream (which I did not bother reviewing) and not about Wake Up And Enjoy The Ride since he only reviewed the first album for Decibel Geek. Clearly, Rich and I are not on the same page with respect to Demons Sing Of The End. Wake Up And Enjoy The Ride is nowhere close to being one of the best albums of the year.

Demons Sing Of The End‘s “(Sure Look Great) Six Feet Under” video:

Demons Sing Of The End‘s “The Devil’s In The Detail” video:

Music video from the 2nd album Wake Up And Enjoy The Ride.Starring Madeline Lewis and Paul Mocan.