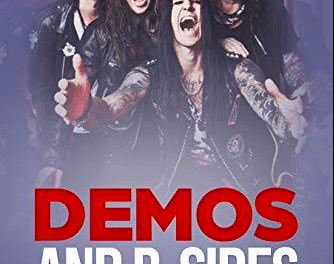 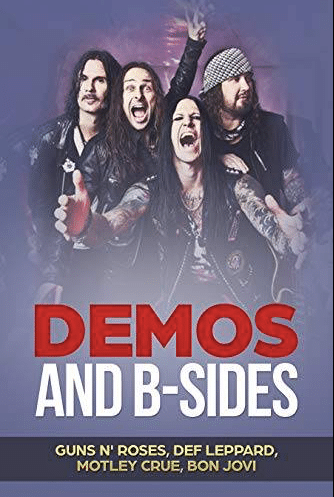 As it turns out, the book title Demos And B-Sides is quite deceptive since it simply is a continuation of The Soundtrack of Our Youth: History of Hair Metal Music. Although I thought there would be a lot of focus on “newer” bands or rare demos and b-sides, that simply isn’t the case. The four bands mentioned in smaller letters on the cover (Guns N’ Roses, Def Leppard, Mötley Crüe and Bon Jovi) made me think that Demos And B-Sides would cover rare and unreleased tracks from those bands. How wrong I was! In essence and as described on the first page of Demos And B-Sides, The Soundtrack of Our Youth: History of Hair Metal Music was getting too voluminous (almost 500 pages) so Demos And B-Sides was born which contains the Hair Metal Hall of Fame, interviews with five “newer” artists / bands and a focus on music from 2000 and beyond.

First and foremost, I’d like to emphasize how cool it is for Hall Lauren to have come up with these two books. I must point out that Hall Lauren did apparently absolutely everything. Obviously, a lot of time, research and listening took place to make these two books happen. I’ll review The Soundtrack of Our Youth: History of Hair Metal Music at a later date since it’s going to take me a little more time to get through it but I will say that from what I read so far, that book is definitely better than Demos And B-Sides, both in terms of content and accuracy in terms of which albums stand out in the ’80s. That being said, any book (or website) that aims to further the hair metal genre is alright with me.

The one tricky part for both books was obviously which bands qualified as “hair metal.” It is stated in The Soundtrack of Our Youth: History of Hair Metal Music that hair metal music really started in 1981. Clearly, groups such as Van Halen and KISS started well before that year but I can’t fathom not including them in the hair metal genre. Certainly KISS in the ’80s, once they dropped the war paint, have to be considered almost the epitome of hair metal. Sadly, none of the albums from Van Halen, KISS and to a lesser extent Scorpions and Y&T are considered throughout both books. How did Whitesnake who started in the 1970s make it as a “hair metal” band but not KISS or Van Halen? In addition, one band that started in the ’80s and clearly in my mind qualifies as “hair metal — W.A.S.P. — is nowhere to be found. Finally, where in the hell is Steel Panther (aside from getting three lines in Demos And B-Sides‘ “Others” section) who have come up with arguably the four most consistent and best albums out of any “hair metal” band in the last ten years?

I must confess being disappointed with Demos And B-Sides. At least three of the four bands that made the Hair Metal Hall of Fame deserve to be there but one of them after the early ’90s never belonged going almost country for a while in the process. I’ll let you guess which band that is or better yet, pick up the book Demos And B-Sides to find out. After the Hair Metal Hall of Fame section, there are some cool other categories for bands to be lumped into including “Theatre Headliners”, “Openers”, “The Godfathers” and “Underrated.” The interviews in Demos And B-Sides are fun to read but a bit tricky since certain questions of course date the interview. Even though Sleaze Roxx has been a big supporter of young bands like Löve Räzer, I find it quite odd that the new Canadian sleaze rockers are featured in one of the five interviews in Demos And B-Sides since they have only released one EP in 2016 and their debut full-length album earlier this year.

Demos And B-Sides contains lists titled The Best of 2000-2017 consisting of “Top Rock Songs”, “Top Ballads” and “Top Albums” which are interesting although you see a lot of the same names from the ’80s even when they’ve released shitty albums. For example, Dokken‘s subpar Long Way Home released in 2002 finished at #44 on the “Top Albums” from 2000 to 2017. How could that be? Even worse, Guns N’ Roses‘ ultra-disappointing stinker Chinese Democracy ranked at #3 on that list. It’s quite obvious to me that unfortunately, Hall Lauren did not dig deep enough to find the hidden gems that are the greatest “hair metal” albums from 2000 to 2017. Where are Steel Panther and Big Cock in the “Top Albums” of The Best of 2000-2017? Demos And B-Sides contains a section titled “The Fans.” No offence to the super fans that are featured in that section but that part should have never been included. I also note that there is no page numbering for Demos And B-Sides. Given that the book is pretty small (perhaps 100 pages), I suppose that’s not a big deal but I really can’t remember ever seeing a book without any page numbering. The layout for Demos And B-Sides is also not that appealing compared to The Soundtrack of Our Youth: History of Hair Metal Music since there’s extra space on top and at the bottom of each page for the former.

I do feel bad for criticizing a good portion of Demos And B-Sides since the book does list Sleaze Roxx in the category of “some of the best sites that cover the music that we love.” Thank you for that! It’s much appreciated. That being said, I think Demos And B-Sides is disappointing. I was expecting a lot more with that title Demos And B-Sides and certainly not a continuation of The Soundtrack of Our Youth: History of Hair Metal Music.