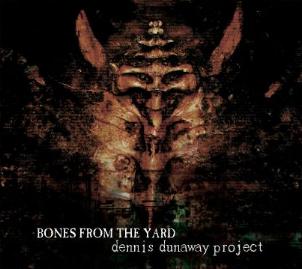 Review:
There was a time when the name Alice Cooper referred to five exceptional musicians and not just the mascaraed frontman that shared the same name, and also referred to some of the best music ever put to vinyl. Among those five was Dennis Dunaway. Whereas each member of the original Alice Cooper defined the image of rock-star, Dennis Dunaway was different. He was the quiet, mysterious fifth man in a group of larger then life characters. If Dennis Dunaway became a serial killer he would be the type neighbors would describe as a nice guy that mostly kept to himself. Thankfully Dennis decided to pick up the bass as opposed to pursue a career in murder.

With all that being said, time hasn’t been kind to the original Alice Cooper members. Their contributions to not just rock, but pop culture as a whole, have for the most part been swept into the dark corners of music history. And you could argue that Dennis Dunaway has been swept the furthest, because who really notices the bassist? That was my opinion anyway, until I started playing Bones From The Yard and actually heard basslines that sounded familiar. I can count the times a bass has stood out in a song on my two hands, yet here it was happening (or maybe I was just looking for them harder than usual).

I have to admit that I wasn’t sure if I would like a Dennis Dunaway solo album. I envisioned his music being too eclectic and off-the-wall for my close-minded tastes. But Bones From The Yard isn’t as odd as I was expecting, although it does have a Masters Of Reality (remember them?) feel to it – a feel that snubs its nose at typical musical stereotypes and doesn’t pigeonhole itself into one specific genre.

As much as I liked “Me And My Boys” and “New Generation”, two songs that could have been 70s rock staples, it is the second half of the CD where the band really takes some interesting twists. “Needle In The Red” is a darkened rocker, the ending of “Stalker” has a “Gutter Cats Vs. The Jets” atmosphere before the female screams of “Satan’s Sister” kicks in, which could be classified as Dennis Dunaway‘s “Black Juju” or “Killer”. “On The Mountain” is a bass heavy sludgy 70s heavy metal track with some great fretwork and the album ends perfectly with “Home Sweet Home” and its powerful vocals.

My impressions of Dennis Dunaway remain, but judging by this album he contributed more to the dark eeriness of early Alice Cooper then I originally expected. It’s good to see you again Dennis Dunaway.

Review:
Dennis Dunaway knows a thing or two about writing a hit record. As part of the phenomenally successful 70’s band, The Alice Cooper Group, Dennis had his hand in some of the most famous records ever recorded. Songs such as “I’m Eighteen”, “School’s Out”, “Elected”, and “Under My Wheels” permeated not only the airwaves but also the minds of adolescent fans all over the world. The group’s message of rebellion was as strong as their music and the fact these songs are still in current rotation today is testimony to their legendary status. But Dennis also had a darker side that was showcased in some of the groups more infamous songs like “Black Ju Ju”, “Dead Babies” and “Killer”. The stage show for these songs helped to propel the band’s unprecedented meteoric rise to fame and fortune.

With his first solo project release, Bones From The Yard, Dennis once again conjures up his infamous style of song writing and brings it menacingly back into the present. The result is clearly one of the year’s best and well thought out records. Aided by the brilliant musicianship of Rick Tedesco (vocals and guitars), Ed Burns (vocals and keyboards) and the staccato bulldozing of Russ Wilson drumming, these songs take off with a majestic force all their own. “Kandahar” has a “Tales of Brave Ulysses” meets “Kashmir” power to it and “Man Is A Beast” focuses on the current and dismal state of affairs dealing with a world that refuses to learn from the past and seems intent on destroying itself. “Needle In The Red” has a Hagar/Montrose first to fourth gear feel and probably the best driving line ever written in, “Waitin’ for the moment where this freeway meets the sky…and out the other side”. “Little Kid (With A Big, Big Gun)” has got to be the catchiest
song written in a very longtime. Ian Hunter lends a hand (or two) for a Jerry Lee Lewis inspired piano track. Hear the chorus just once and, just like any incarcerated lunatic, you’ll be singing it all day whether you want to or not. As Dennis explains, “The key line follows the guitar break”, “You made it so easy for him to get his gun.” With Ian Hunter on piano, Joe Bouchard on cowbell and the great musicianship of Rick, Russ and Ed, what more could anyone ask for?

“Stalker” has a very Cooper-esq feel to it, complete with a spoken word voice over reminiscent of the classic Alice Cooper track “Killer”. “Satan’s Sister” and “Red Room” feature Dennis the menacing vocalist and both songs are a trip. “Satan’s Sister” has a Stones-y groove to it with a locomotive rhythm section and “Red Room” could have been a recording of Ray Davies overdosing on Viagra. It paints a picture of a lust filled “cat and mouse” relationship complete with a “moaning Lisa” in the background and is actually inspired by an incident Dennis experienced when he was seventeen and visiting the red light district in Nogales, Mexico.

“On The Mountain” dives into cocaine addiction with a power chord driven message as intense and grandiose as the drug’s hold over its victims.

But not all is gloom and doom here, tracks like “Me and My Boys”, “New Generation” and “Subway” reflects Dennis‘ enthusiastic commitment to writing, recording and touring his new material. “New Generation” with its anthemic message could be the next great song of adolescent or new found independence and “Subway” pays a street smart yet endearing homage to a romantic way of moving through the city. It opens and ends beautifully with the haunting melody of “I’m In The Mood For Love” played passionately on saxophone by Michael Tedesco, Rick‘s Dad.

The CD closes out with the epic, “Home Sweet Home”. As Rick tells it, “We wanted to end the record with something that was going give a kind of nostalgic feeling like when I was a kid and I was hearing a great record for the first time from one of my favorite artists. That classic big ending makes you feel like it was a heck of a ride and you’re just a little sad it’s over”.

Dennis remembers it this way, “All of the city themed songs on Bones From The Yard originally came from a double concept album that I wrote to be the next Alice Cooper album. This was to be the gigantic big ending finale of that album. When we recorded this song, I thought about actually throwing in a kitchen sink and recording it.”

Indeed, there is a lot going on here as this is a record that gets better and better with each listen. There are hidden voices and subliminal uses of an assortment of darkened sounds but they don’t make this record a scary one, just scary good.

This is a big production record flavored with influences that sound like a melting pot of rock’s veteran artists. Combine the best of Alice Cooper, Led Zeppelin, Montrose, Blue Oyster Cult, Mountain, Mick Ronson, Van Halen, The Ramones, and throw in a dash of Barry McGuire, yes, “Eve Of Destruction” Barry McGuire and you have only a small taste of what this great new band sounds like.

I urge you to pick up Bones From The Yard…You’ll definitely dig it.