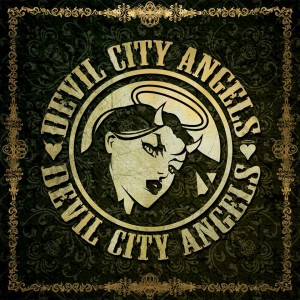 Review by Ruben Mosqueda (August 19, 2015):
Devil City Angels issued an EP at the tail end of 2014 and proceeded to play a handful of select live dates, then reconvened to write and record their self-titled album. Devil City Angels which is currently comprised of singer Brandon Gibbs, guitarist Tracii Guns, drummer Rikki Rockett and the latest addition Rudy Sarzo who takes over for Eric Brittingham who played on the album but departed shortly after the recording wrapped up.

The album is a great mix of classic and contemporary hard rock, there’s no flash like we’ve seen in Guns’ or Rockett’s previous bands. The songs are incredibly melodic, catchy and memorable which makes for a fun listening experience. Devil City Angels launched the album with “Boneyard” which hit the mark sonically and lyrically. Brandon Gibbs has a powerful, soulful voice and a brilliant sense of melody that sets him apart from his contemporaries. The best example of this is heard on “Boneyard,” “I’m Living” and what I believe is one of the best ballads of the 2000s, “Goodbye Forever.” There’s not a dull moment on Devil City Angels which is a pleasant surprise in an age where older, established musicians tend to satisfied with one or two good tracks for an album and proceed to overload the rest of the album with subpar material. The most unique track is “All I Need” which features Beatlesesque chorus and a super sappy, poppy feel to it—yet it works. Devil City Angels covered the Mike Chapman penned “Back to the Drive” which was made famous by Suzie Quatro. If you’re searching for a solid hard rock record with twists, turns, chockful of melody that’s  brilliantly executed check out Devil City Angels’ self-titled album.

Review by Metal Headz Media (August 26, 2015):
This album will easily make my top five list for 2015. Everything about this album is great. The musicianship, vocals, and lyrics are fantastic. It’s awesome to listen to album from start to finish that will grab your attention the whole way through. Three out of the four members in Devil City Angels are well known artists that started their music careers in the ’80s. Devil City Angels consist of Rikki Rockett (Poison), Tracii Guns (L.A. Guns), Eric Brittingham (Cinderella — who is no longer in the band but plays on the album), new bass player Rudy Sarzo (Ozzy, Quiet Riot, Whitesnake, etc.) and singer Brandon Gibbs (Gibbs Brothers, Cheap Thrill).

Devil City Angels all started when Rockett and Guns were at a charity event and they played a few songs together that night and after the show they started talking about how they need to start a project. With Bret Michaels doing his solo thing (with no Poison tour/album in the future) and Guns not getting back in L.A. Guns, they both had some free time on their hands. They recruited Brittingham on bass, and Rockett knew Gibbs from producing some of his earlier work and knew he had a killer voice; the band was set to take over the globe. They wrote four songs (“All My People,” “No Angels,” “I’m Living” and “Bad Decisions”) and released them online for their fans to listen to, and they even did a little tour to support the singles. I was lucky enough to see them about a year ago, and they were amazing live. Their set list was filled with those four songs as well as songs from Poison, Cinderella and L.A. Guns. Gibbs did a terrific job doing justice on all the songs from his bandmates’ previous efforts. I really hope they plan on touring with this album and that most of their set will be from their debut.

One would think that with a line-up like this, the album would be all glammed out. It is far from it. Their self-titled album is a feel good, blues infused, melodic rock album. There are flashy moments of some loud guitars and ripping solos, but I would say that this is a stripped down good ol rock and roll album. I found it very difficult to listen to this album in a mindset that I knew I had to write a review for it. At times when I would try to focus, the music was taking my mind to different places and I just wanted to sit back and enjoy listening to it for the sake of listening to something that kicks ass.

Their debut album has ten smoking tracks on it and four of them are the ones they released last year. The album starts off with the funky up-tempo song “Numb.” This is a great song choice to start the album off with. It sets the mood for what the listener will be getting into. This track shows the talents of all the musicians in the band. Gibbs‘ powerful, soulful, bluesy voice makes it apparent that he is the perfect fit for this group. Guns‘ bluesy guitar sound and ripping solos are well orchestrated. Rockett and Brittingham have a strong chemistry together on this album. It’s just so sad Brittingham didn’t want to stay around any longer. I am sure Rockett and Sarzo will have that chemistry too! The album is well produced as well, because all the instruments are evident in every song and you can hear just how good everyone is playing.

“Boneyard” is the first official single for the album (they also released a video for the song), and it starts off with Gibbs telling the listener to “Oh ya! crank it up, because he has to tell you a little story, you ain’t going to believe this man.” The song takes you through a journey of a woman that turns a boy into a man! It is powered by this tempo that will have you either tapping your feet or snapping your fingers. The only disappointment is when you think you are about to get a killer guitar solo, it slows back down and goes back to the catchy chorus.

My favorite track on the album is “No Angels.” That song is so well written that after your first listen, you will want to listen to that track again. After the second time, you will be signing the chorus for the rest of the day. This song sounded phenomenal live. I hope I get to hear it live again real soon.

I really feel there are no “fillers” on this album. It is good from start to finish. It has everything from a Beatles‘ infused track “All I Need,” a ballad “Goodbye Forever,” a cover of a Suzi Quatro song “Back To The Drive,” and a closing rocker “Bad Decisions.”   If you are looking for a full on glam album because of who is in the band, you will be disappointed, but if you give it a chance you will end up loving the album. This could possibly be my #1 album for 2015, but we still have a few more months yet and I need to wait and hear some of the other releases that will be released before year’s end. Thank you Devil City Angels for putting out such a great kick ass rock n’ roll album. The music world has been missing something this good in a long time.