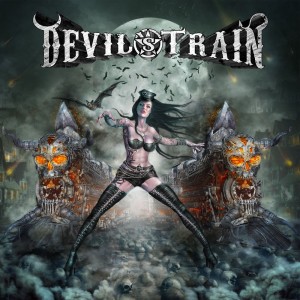 Review:
As 2015 draws to a close, it comes time to do summaries of many things including the music released throughout this year. And this passing one introduced us to a lot of interesting releases, some unexpectedly stellar debuts, and some equally unexpected disappointments. I’m sure everybody, or at least a lot of Sleaze Roxx readers, might have the same impression.

Initially, I had my list of top releases for this year ready around the beginning of November, but recently I stumbled upon a release by a band I did not have the pleasure of hearing earlier on. It is yet another album that nearly avoided my radar and after listening to it, I’m really glad it didn’t.

Devil’s Train are a relatively fresh band of experienced musicians. Their sophomore effort simply titled II was released on the 23rd of January 2015 so extremely early in this year. But I can honestly say it is one of the best I heard in 2015. I can also add, with a crystal clear conscience that this release deserves so much more attention than it got (certainly from my side). Sometimes the expression that the band rocks hard may sound a bit cheesy, but here it is the best fit. These cats can really play, and they do with fire in their bellies. The songs here are sometimes fast, sometimes slower (like “Mr. Jones” which is by far my favorite number on the album) but they all are very rhythmic, very aggressive with really well produced drums, on which the band’s drummer Jörg Michael shows what kind of a monster musician he is. The guitars are also killer, as the solos could put a lot of so called guitar virtuosos to a bit of shame.

I remember thinking that the latest Armored Saint’s album Win Hands Down was the most perfect balance of hard tones which were really heavy but did not cross the line to the heavy metal territory. I was wrong. Devil’s Train goes at least one notch heavier, rocking even harder but not delving into a massacre of death metal or anything like that. As for any weak spots, if you really had to stick it to this release, you could say that the lyrics are pretty obvious but then again this is hard rock, this is fun. You don’t expect any overcomplicated philosophical subjects that are being served in tons by progressive acts.

This is a very, very heavy hard rock album. Lemmy of Motörhead fame once said in some ancient interview he gave at the beginning of his career that he does not consider his music “metal” but “heavy rock.” And I think that this term is the best way to describe the music by Devil’s Train. A real heavy boulder of a rock, of which their sophomore effort is of the finest example. I am glad to catch it before the year’s end as it definitely makes my top list for 2015.

Out on January 23rd, 2015Make sure to set your preorder now: http://hyperurl.co/devilstrain_2 iTunes: http://smarturl.it/devilstrainII_itunesWatch the other …

Devil’s Train “Down On You” Official Music Video