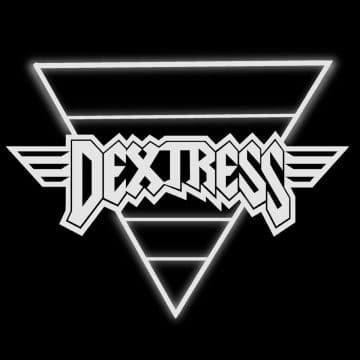 Review:
If you’ve followed Sleaze Roxx pretty closely in the last three years (i.e. read more than just the articles on the ’80s era veteran bands), you’ll have likely taken note of a band named Dextress hailing from western Canada. Four high school level students combined forces to come up with an excellent EP aptly named The Demo. Around that time, I interviewed the band minus the drummer whom if I remember correctly was a “no show” for our phone interview. The background of the four band members was quite interesting to me with guitarist Mark Janz and singer Jackson Taylor very well versed with the music that Sleaze Roxx catered to while bassist Christian Garcia and drummer Marcos Rodriguez both listened to bands that well… Sleaze Roxx rarely mentioned or catered to. Given this significant clash of musical taste, I fully expected that eventually Garcia and Rodriguez would not be part of the band.

Fast forward to about a year and a half later and Dextress were in Canada’s “Belle Province” (the province of Quebec with its mostly French speaking people) to record their debut album with well known producer Glen Robinson. After the band recorded the album, Garcia and Rodriguez elected to drop out of the band, which wasn’t a surprise to me but the timing of it sure was. In what turned out to be a real stroke of luck — more on that later — Janz and Taylor were able to recruit former Lucid Scream singer Eric Paulin to be the band’s new bassist. Eventually by the end of 2016, drummer Keith Runco officially completed the line-up and it seemed that the group was back on track. And then the unexpected happened with sadly, lead vocalist Jackson Taylor “temporarily” stepping down for personal reasons — whatever that means! This might well have destroyed any other band but this is where the stroke of luck in having Paulin in the band came up. Paulin seamlessly it seems took over the lead vocals in Taylor‘s absence and drummer Keith Runco‘s brother Reece stepped up to handle the bass playing duties.

Once all the band personnel was seemingly taken care of, I contacted guitarist Mark Janz to interview him and find out what was going on including with the debut album that I knew had been already recorded more than a year ago. I was pleased to hear that Janz had decided to — and worked things out with his former bandmates — so that he could release Dextress‘ debut album as recorded back in the summer of 2016. Now, there’s no question that Dextress today is quite different than the Dextress that is playing on the debut album since Janz is the only common denominator between both line-ups. Nevertheless, I am actually glad that Dextress released their debut album with the Janz–Taylor–Garcia–Rodriguez line-up because there’s no denying that the foursome had a lot of chemistry together and it sounds like it on the debut.

Dextress‘ debut album kicks off with three of the first five tracks having already appeared on the EP The Demo. I haven’t heard The Demo in a long while but the three tracks in question — “Wild Is The Night,” “Sex, Drugs, Rock N’ Roll” and “Red Eye Remedy” — sound like they have a lot more bite which is likely largely due to better production. Wisely, Dextress opted not to include the song “Under My Skin” which was hands down the weakest track on The Demo.

Two things really stand out on Dextress‘ debut self-titled album. First of all, Jackson Taylor has a fantastic and distinctive vocal delivery that reminds me of Diamond Dave at his prime. Taylor doesn’t sound like Roth but he has that “it” factor and distinctiveness that sets him apart just like Roth had on those first six Van Halen albums. To say that Taylor is oozing with talent sounds about right. What a shame that he’s currently not on the Dextress ship. That begin said, Taylor‘s contributions seem to be very well recognized as he along with Janz have the biggest photos on the back of the CD, both him and Janz provide the “thank yous” in the linear notes and the duo share the songwriting except for two tracks. So who knows, perhaps we will see Taylor once again fronting Dextress in the future. All I know is that Paulin has some big shoes to fill but from what I hear, he is doing a great job handling the lead vocals.

The second thing that really sticks out on Dextress is Janz‘s guitar playing. The lad might just be 19 years old (or however old he is now) but he reminds me of some of the best guitarists to have came out from the ’80s hard rock and heavy metal era. His guitar solos in particular are a thing of beauty with melody and finesse all rolled into one. In some ways, he reminds me of a young Eddie Van Halen whose guitar playing and short creative outbursts added so much to the Van Halen songs. I feel the same way with Janz‘ s guitar playing. Mark Janz — remember the name — this might be the next guitar hero.

I knew that the three songs plucked from The Demo would sound great and they do. What I was most intrigued about were the newer songs. Dextress had already released a few songs along the way such as “Bring On The Girls” and “Guilty Man” but given my tendency to avoid listening to songs on a digital platform, I wasn’t that familiar with either of them. “Bring On The Girls” starts off very old school Van Halen like with the vocal harmonies at the beginning. Frankly, I would have liked the vocal harmonies to be a tad higher pitched but whatever, I am nitpicking a little bit. My favourite tracks on Dextress are the opener “Wild Is The Night,” the infectious “Red Eye Remedy,” “Down By The River” and “Play Nice” which is so simple yet such a great feel good song. The one track that I waffle back and forth on a bit is the album closer and ballad “Distance.” It’s not a bad track but I find it a little on the long side. I wish the album would have finished off on a faster track like “Guilty Man.”

Dextress‘ “Wild Is The Night” song:

Wild Is The Night – Dextress (Audio)