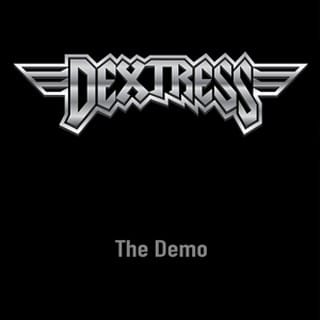 Review:
I owe one big thank you to my friend Bruce in Calgary for sending me a link to preview a new EP called The Demo, from a band unknown to me at the time called Dextress. There was no comment of any sort from my friend, simply a link to snippets of four tracks. As soon as I heard the short samples I knew that I wanted to hear more! A while later, Dextress‘ debut EP was finally being played in my CD player — call me old fashioned if you will, but I always like to have the physical album rather than downloading a bunch of songs.

Dextress has to be the most exciting and promising band that I have heard in a long time. It’s very hard to believe that the songs they are coming up with actually emanate from one 16 and three 17 year old “kids” — they simply sound too good and too sophisticated to come from such young people. Lead vocalist Jackson Taylor has just about the perfect voice for sleaze type rock and the rhythm section of bassist Chris Garcia and drummer Marcos Rodriguez is rock solid and seem to bring musical influences other than pure hard rock or metal to the table. But the best of all is Mark Janz‘s guitar playing — think guitar hero in the vein of Jake E. Lee or George Lynch and you will have an inkling of the kind of talent he possesses. The young hotshot guitarist does not overplay on any of the songs but his guitar virtuosity and talent are undeniable.

The songs on The Demo are simple in that they are catchy and riff based, yet sophisticated by offering many different tempos and don’t seem to follow traditional song structures. I can’t say enough about the four songs on the EP, I just wish there were more of them to listen to. It is hard to pick my favorite track but I will go with “Red Eye Remedy” due to the infectious and melodic (yet basic) guitar riff around which the song is built on, the vocal harmonies — I want more of that — and the absolutely scorching guitar solo towards the end. The production, or sound, on The Demo is not the greatest but it is good enough for me to want to continue listening to the EP and appreciate just how good these four young musicians are.

There is not much more to say except that any lover of the sleaze rock genre is likely to really enjoy Dextress‘ The Demo. I already can’t wait to see what Dextress comes up with next.