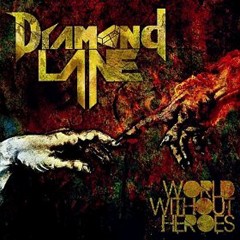 Review:
Three long years in the making, Diamonds Lane‘s second full-length album is finally upon us. Not only did this California band knock my socks off when I first heard their Johnny Lima produced Save This City back in 2008, but they practically blew my entire wardrobe across the room. That four-song collection was a damn near flawless step back in time to the late ’80s. On World Without Heroes Diamond Lane slightly change their focus, mixing equal amounts of sleaze with modern elements for a sound that doesn’t just scream ‘retro’.

One of the reasons for the long wait of World Without Heroes was the introduction of a brand new rhythm section, and drummer Jonah Nimoy proves to be a killer addition as he seems to be trying his hardest to slam his sticks right through the drum heads. Even more impressive is guitarist Jarret Reis who has really upped the ante on this album — his licks are both precise and varied and seem to come out of nowhere like a Mike Tyson uppercut during his prime. Vocalist Brandon Baumann still has the perfect rock voice, and while the Mad Margritt comparisons still ring true, the Sebastian Bach sounds aren’t as evident as they were three years ago.

“All Rebels Welcome” starts things off on the right foot as the song builds itself up into a fist-pumping anthem. “I Know Who You Did Last Summer” continues with that turbo-charged sound — and if Jennifer Love Hewitt‘s breasts bounced with the ferocity of this song her movie that influenced this track would have been the top-grossing of all time. “City Of Sin” and “All The Pretty Things” are the type of songs that could be found on current rock-radio (you can decide for yourself if that is good or bad) and find the band at their heaviest while “Sundress City” and “Time Bomb” have that egotistical ’80s vibe that we all love.

Occasionally Diamond Lane try too hard in an attempt to appeal to current rock trends as shown on “Endgame” but for the most part they successfully walk the line between old and new. World Without Heroes may not be the album we expected after hearing Save This City — but with wailing guitars, unrelenting screams and a backend determined to hammer the message home, it is a great effort from a band that is trying to find their place in the currently screwed-up music business.