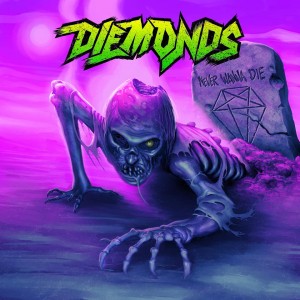 Review by Olivier (August 17, 2015):
Diemonds go modern — uh oh. I always have a lot of trepidations when I hear that one of my beloved bands has decided to adopt a more modern sound because the results are often disastrous. There are certainly a few recent examples to draw upon. Santa Cruz followed up their album Screaming For Adrenaline — which landed the #1 spot for Sleaze Roxx’s Top Ten Albums of 2013 — with the modern sounding self-titled stinker. Halestorm, who released one of my favorite albums of 2012 with The Strange Case Of…, followed it up with Into The Wild Life, which was not disastrous but certainly quite a disappointment.

I get why artists decide to adopt a new sound or jump on a certain bandwagon. The whole modernization of some sleaze rock bands’ sound reminds me of when many of the top hard rock / heavy metal bands have jumped on some sort of bandwagon in the past when a “new” style of music seems to be the way to sell lots of records. This occurred for instance in the mid ’80s when many well established acts came up with very commercially sounding efforts. When I think back, perhaps all of these bands were thinking that they could emulate Van Halen‘s success with their keyboard friendly hit “Jump” and the diamond certified 1984 album. From what I recall, Motley Crue got the ball rolling when they followed up their amazing Shout At The Devil album with the slower radio friendly glam metal and disappointing Theatre Of Pain. Many bands rightly or wrongly also jumped on that bandwagon releasing subpar follow up records. The examples are many: Iron Maiden following up Powerslave with the synthesizer friendly Somewhere In Time, Judas Priest following up Defenders Of The Faith with the poppy Turbo, Quiet Riot following up Condition Critical with the synthesizer infested QR III, or KISS who did a three step fall in that regard from Animalize to Asylum to ugh Crazy Nights.

And of course, once grunge music reared its ugly head with Nirvana‘s breakthrough album Nevermind, lots of hard rock / heavy metal bands strayed into grunge territory. The culprits included Dokken with their 1997 album Shadowlife and KISS (again!) with their 1997 released Carnival Of Souls. This is not to say that I did not enjoy some of these “bandwagon” type records but let’s face it, whenever a band tries to adopt a new sound just to sell some more records or “adapt” to the times, the results will most likely be subpar compared to if they stayed true to their roots.

Luckily, unlike Santa Cruz and Halestorm who recently just went way too far with the modernization of their sound, Diemonds‘ attempts to modernize their sound have resulted in tweaks rather than a major overhaul to their established sound emanating from their stellar prior release The Bad Pack. To be fair to Diemonds, the chances that they could really successfully follow up their 2012 album (or 2011 or whenever they first released it independently) The Bad Pack in my mind were going to be very low. It is not that Never Wanna Die is a bad record because I enjoy all of the songs and like it a little more each time that I listen to it. It is simply that I have held the Canadian sleaze rockers’ The Bad Pack in such high regard and at this point, would rank that album in my favorite records of all-time.

Is Never Wanna Die a worthy follow up to The Bad Pack? Yes. Is it better than or even close to The Bad Pack? No but that is not to say that Never Wanna Die is not a solid rock album because it certainly is. Being old fashioned or likely admittedly somewhat stuck in my musical preferences, the modernization of the guitar sound on Never Wanna Die simply does not resonate with me. I also find that Diemonds‘ new record is more “commercial” sounding than The Bad Pack, which should be viewed as a negative, as the fury that can be found on The Bad Pack seems to have been replaced with more calculated slower paced material albeit with a heavy sound. How can songs such as “Secret” and “Save Your Life” not be considered more “commercial” sounding than anything found on The Bad Pack?

My favorite tracks on Never Wanna Die are the faster paced “Better Off Dead” which is likely the closest remnant to The Bad Pack, “Meet Your Maker” which I first heard more than two years ago so which has an advantage on the other tracks, and “Ain’t That Kinda Girl” which puts the showcase on Panda‘s singing — which she does throughout the entire album. As I previously indicated and should be emphasized, all of the tracks on Never Wanna Die are good ones. At the end of the day, Never Wanna Die is a more modern sounding commercial effort compared to The Bad Pack and for that reason, does not measure up to The Bad Pack in my eyes. That being said, I find that Never Wanna Die is still a solid and enjoyable hard rock album that will be getting a regular spin on my CD player for likely many years to come.

Review by Daddy Rockett (August 23, 2015):
As soon as you hear the opening riff of Never Wanna Die, you will instantly put your devil horns up in the air and start waiving your metal flag. The album is filled with fast and furious riffs that won’t allow you to put your arm down till the album is over, 35 minutes later. These Toronto natives have already released their killer third album already in some countries such as Canada and Japan. This is my first exposure to Diemonds, and I am so glad that I now know who this band is.

Diemonds are led by the sexy Priya Panda, who has an amazing voice that fits the music perfectly. With any female fronted band, Halestorm will also be the first comparison to inform people what the band might sound like. Yes, there are moments that this album sounds like them, but it is only when Halestrom was fast and heavy (like their first two albums and not the new radio friendly one). This band is not afraid to show their love for ’80s rock. With influences like Motley Crue, Guns N’ Roses and KISS, how could one go wrong? This album has everything that anyone that is a fan of some classic metal/rock will enjoy. It is filled with blazing guitar solos, catchy choruses, and lyrics with angst and rebellion. With Panda handling vocals, the rest of the band is comprised of the excellent dueling guitar work of C.C. Diemond and Daniel Dekay, bass thumping Adam Zlotnik, and pounding drummer Aiden Tranquada.

Their look is very similar to the ’80s thrash movement. Tore up jean jackets, leather jackets, long hair, and no make-up (with the exception of Panda). Even the album cover reminded me of something I would have seen back in the day. Diemonds are here to tear your face off with their modern ’80s style of metal. “Never Wanna Die” is a great song to kick start your music journey through this new release. It starts off with the loud guitars, little double bass kick drumming, and chanting that will have you singing along the next time you hear it. The next track (my favorite off the album), “Hell Is Full”, is a song about what might happen if the apocalypse truly happens. “When hell is full, the dead will walk the streets” is a great line start to off the sing-along chorus. “Better Off Dead” is filled with three last words: “fuck off forever.” Someone must have really pissed them off for lyrics like this! The song even ends with the band screaming, “FUCK OFF!” The rest of the album will keep you rockin’ out with other stand out tracks such as “Ain’t That Kinda Girl,”Forever Untamed” and “Meet Your Maker.”

Do yourself a favor and pick this album up. You will not regret it. I will now have to pick up their earlier albums: The Bad Pack and the EP In The Rough. After your listening experience is over, one might need to ice their shoulder or go see a chiropractor because keeping your devil horns up for 35 minutes straight might leave you with a sore shoulder. If that would be the case, can’t say I didn’t warn you.

Reviewed by Olivier and Daddy Rockett for Sleaze Roxx, August 2015