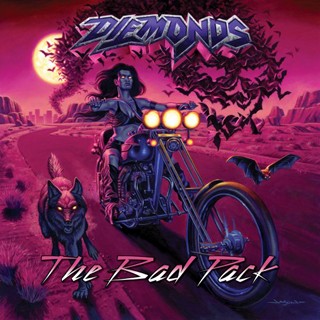 Review:
I must confess to having had a sneak preview of Diemonds‘ The Bad Pack since they were the first band on the bill for the Slash concert in Toronto back in March. Diemonds‘ performance, and most importantly their songs, on a first ‘loud’ listen were good enough for me to seek them out after their concert and buy whatever music they had to offer.

Although I thought that I was seeing a band from the States when I first saw Diemonds onstage, I later learned that they were a local band from Toronto. Although the very cool art cover on The Bad Pack and name ‘Diemonds’ (presumably pronounced Demons) suggest that Diemonds is a very heavy band, the band plays straight out rock n’ roll with a heavy metal, and to a lesser extent, punk edge. I actually first listened to the band’s 2008 EP In The Rough and although it was good, it was raw and ‘rough’ (as advertised). Whatever polish and work Diemonds‘ songs might need to get to the next level was definitely achieved on The Bad Pack.

Once I put The Bad Pack CD on the stereo, it simply blew me away. As of writing this review, I have listened to the album too many times to recall — it is that good! Not since hearing Wolfchild‘s debut or Sister Sin‘s Switchblade Serenades have I been blown away like I have when hearing Diemonds‘ debut full-length.

Female vocalist Priya Panda, who has a great voice and sexy legs, fronts Diemonds. With her voice, she really gives the band a distinctive sound and you can hear her attitude throughout all the songs. In addition, what makes the songs on The Bad Pack so good are the melodic guitar solos throughout the songs over the great riffs at any point in time. There are no ballads as the band launches from one fast rocker to another. There are lots of sing along opportunities on many of the songs, which makes them all excellent tracks to play live. Not surprisingly, all of the tracks clock in at less than four minutes except for the closing “Mystery”. The closest band that I could compare Diemonds to would be Sister Sin, which I think is a high compliment considering that I find Swedish head-bangers one of the best bands to come out in a long time.

The Bad Pack kicks off with “Take On The Night”, which is presumably the single off the CD given that there is a video for it. It’s a great song — catchy with fierce solos and great riffs. My personal favorite is next, “Lil’ Miss”, and again it includes great riffs with lots of solos throughout the song, while “Loud N’ Nasty” is exactly what you would expect. Other favorites of mine are “Left For Dead” and “Trick Or Treat”, but every song on The Bad Pack is good and follows the same formula more or less, except the closing track “Mystery” that starts off with a bass intro. What is cool about the bass intro is that once the guitar riffs start, you can still hear the bass melody in your head given that the song started with it. “Mystery” eventually kicks into overdrive before slowing down towards the end.

Had I known about Diemonds‘ The Bad Pack back in 2011, when the band began selling it at their live shows, it would have been my pick for CD of the year — for now, it is my pick for album of the year for 2012! After ‘discovering’ Reverse Grip, Last Bullet (who were handing out their EP free of charge after the Slash concert) and Diemonds in the last few months, I can only conclude that the Toronto hard rock/heavy metal scene is doing well and is filled with many talented bands.