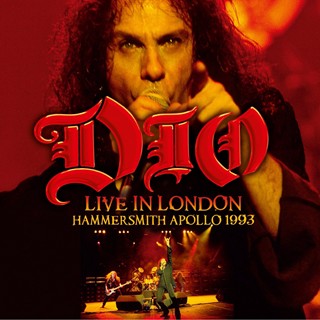 Review:
The raiding of the Dio ‘vaults’ continue as Eagle Rock Entertainment issues Live In London: Hammersmith Apollo 1993, a concert originally filmed on December 12, 1993. This performance has been issued on double CD, DVD, and Blu-Ray, and captures the Dio band in the midst of their European tour behind the criminally underrated album Strange Highways. The band at the time (of course) consisted of legendary Ronnie James Dio, guitarist Tracy G, bassist Jeff Pilson, drummer Vinny Appice, and hidden somewhere on stage, keyboardist Scott Warren.

The Live In London: Hammersmith Apollo 1993 set consists of eighteen tracks that cover every classic Dio era through songs such as “Stand Up And Shout”, “Don’t Talk To Strangers”, “Last In Line”, Holy Diver”, “Rainbow In The Dark”, and ‘We Rock”. Never fear, because the Rainbow and Black Sabbath eras are also represented via “Heaven And Hell”, “Mob Rules”, “Children Of The Sea”, and “Man On The Silver Mountain”.

It’s a well rounded setlist, and the band also included (then) new material from the Strange Highways album. “Evilution”, while not the best track on the aforementioned album, goes over relatively well, as does “Pain” and “Jesus Mary & The Holy Ghost”. “Hollywood Black” will go down in history as of the gems of the latter Dio catalog and it too made its way into the setlist. The band is tight — Pilson‘s backing vocals worked wonderfully with Ronnie James Dio‘s lead vocals, and Tracy G shined throughout the performance. While drum solos were passe even back in 1993, Appice‘s was entertaining and not a complete ‘bore fest’. The set ended with “Here’s To You” which was another new track from Strange Highways — while it was a huge risk to end the show with it turned out to be an extraordinarily brilliant one as the audience just lapped it up.

No matter if you’re a novice or a diehard Dio fan, this performance has just enough classics alongside some deep cuts to make it worth your while. Even when the musical tides were changing, Ronnie James Dio‘s music proved to be timeless — as demonstrated by Live In London: Hammersmith Apollo 1993.

Reviewed by Ruben Mosqueda for Sleaze Roxx, May 2014