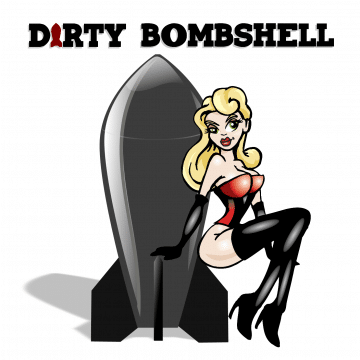 Review:
I was given the opportunity to review Dirty Bombshell, who are a complete newcomer to my eyes and ears and I must admit I was curious but in the end, came away a bit bummed. My thoughts on the group was obviously a blank slate and I am always looking and hoping for the next new glam band, both in image and in sound. I pressed “play” — okay not too bad, sort of a pop punk that initially reminded me of Queeny Blast Pop, in some aspects. Next, I checked out the image — definitely not glam by any means but not a deal breaker.

As I listened further, the music was catchy but little things and especially the lyrics became something that I wondered about and began to think, “Just what type of audience are these guys looking for? What we got here is basically a lesser quality Steel Panther and the next question is do we need a lesser version of Steel Panther?” See, throughout listening to this, I wanted to like the album, because musically it’s not bad, but I kept finding reasons not to or to question too many things.

First off, you will notice the lyrics and general theme of the album. Highly sexual and very blatant. You can be amused for a song or two but for the overall album, it can become quite juvenile. I know, I know. You can name countless bands that have songs of this nature, and you can also bring up the death metal spectrum that does have similar but more violent similar themes but all this goes to the aforementioned audience question. Who do you play for? Just like you couldn’t play Cannibal Corpse‘s “Fucked With A Knife” in general company, playing “16 Sexteen” while you are in the same company will go over just about as well. I see the general target audience to be a frat party or bar where singing in unison with beer in hand, to the lyrics of “Pants Off” may be a better time and place. Hopefully, the women /girlfriends in the audience may be in a more forgiving mood as well.

Like I mentioned, musically, Dirty Bombshell are not too bad — sort of a power pop Crue-ish sound with touches of Van Halen. Vocalist/bassist J.D. has a voice that fits the sound and genre with his raspy voice and his bass playing is quite prominent in the mix and gives the music a great addition to the sound. This is one aspect I really liked, because I think it’s great when the bass playing is prominent in the mix. Guitarist Ryan keeps a standard riffing backbone to the songs but it’s nothing to set the world on fire. The same can be said for the drumming — standard and to the point. So that goes to my point about questioning things, I just found things a bit ho-hum…

So, as you can see with the basic sound and the aforementioned lyrical approach, Dirty Bombshell may be limited in audience appeal. I will say this. There is a time and place for everything and the music is not terrible. You just have to accommodate and to know when to enjoy the band and its sound. Also, I think there will be those that really don’t care what the band does and embrace what they have to say both lyrically and musically. We all have our likes and dislikes, so take a listen, to see if the band floats your boat.

Reviewed by Will “Lee” Bones for Sleaze Roxx, November 2016