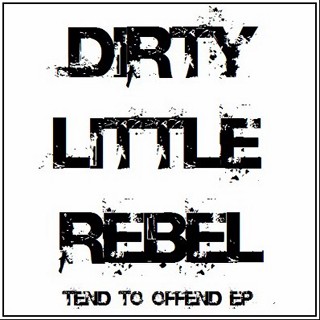 Review:
Dirty Little Rebel is a UK based band that founded in early 2012. Influenced by hard rock, punk, and glam, the goal has been to keep things simple with catchy riffs and straight up rock and roll — mission accomplished with their new EP titled Tend To Offend. Full disclosure, the first listen of Dirty Little Rebel‘s debut did not ring instant classic in my head. It took a couple listens (and shuffling of songs) for this EP to stick with me, but it has — with a couple of songs making it into my ‘Great Fucking Tunes’ playlist.

Tend To Offend kicks off with “Sleaze Driven Army”, showing off Rebel Rogers‘ vocals and catchy guitar riffs that set the tone for the rest of the album. The sound is a unique blend of seventies punk, eighties glam, and leftover nineties rock (see Ugly Kid Joe). “Susie” is the next track and one of my top two favorites — a salute to sex, drugs, and rock and roll through dirty little Susie whom we are told ‘it’s not easy being sleazy if you know what I mean’. Most of us don’t, but that’s the beauty of “Susie” and the rock and roll fantasy. The ending of song three, “Devil Show”, is pure madness — it’s a dark song that builds in energy, climaxing with screaming and heavy guitars for a Quentin Tarantino type ending that could probably be called “Susie, The Sequel”.

For me, it’s the song “Reckless Love” where Dirty Little Rebel truly kicks ass. It is the perfect blend of hard hitting guitar rock and high energy punk lyrics and is a track I find myself continuing to listen to while on the subway, at work, or fantasizing about Susie.

Tend To Offend comes off as raw on the first listen, maybe too raw for some, but it was during the second listen where the fusion of punk and sleazy rock came together for me. “Susie” and “Reckless Love” are phenomenal punk inspired rock tunes and show an enormous potential for a new band that appears to have a good grasp on the type of music they want to make.