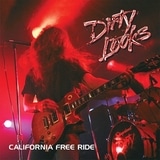 Review:
Ever since returning from hibernation a couple of years back, Dirty Looks mainman Henrik Ostergaard has been a man possessed. California Free Ride is the band’s second release this year, following on the heels of the ‘return-to-form’ Superdeluxe. Has Henrik been bitten by the creativity bug, or have these songs been in the works since he first disappeared in the mid-90’s? I’m guessing the latter, because no matter how much I try and get into this CD it always feels like Superdeluxe leftovers.

As usual, Henrik‘s distinctive Bon Scott inspired vocals are the focal point, and of course he sounds exactly as he always has, singing with conviction and his trademark drunken slur. If you’ve never experienced Dirty Looks before I suggest you check out “Under My Skin” (one of the better songs on this release). I think this song offers a perfect introduction to the masterful insanity that Henrik Ostergaard has always offered, as when he stops the song and starts mumbling incoherently I can’t help but smile.

There are some cool tunes included here, but Dirty Looks‘ past has set the bar so high that I’m beginning to wonder if they can ever match their earlier greatness. One thing that might sell California Free Ride to hard rock fans is the heaviness of the entire CD. This is arguably the band’s hardest rocking album to date, as they seem to have replaced some of the AC/DC riffage with a hard crunch, likely due to the departure of underrated guitarist Paul Lidel. With that being said, the songs don’t come across as instantly memorable as classics like “Oh Ruby”, “Blue Tequila” and “Nobody Rides For Free”.

“Only Child” and “Come To My Party” are about the only songs that capture that old groove oriented Dirty Looks sound, the rest is full-throttle rock filled with an abundance of bad attitude. I’m also confused at the inclusion of the oddity “Clear Thoughts” and “Trip The Light”, which is an alright song, but it first appeared over a decade ago on Chewing On The Bit. I’m starting to get the feeling that these latest Dirty Looks releases are rushed, and I hope Henrik and the guys take their time on the next one and give us something absolutely killer.

As much as I love Dirty Looks, they also cause me lots of frustration. All too often their albums have been an exercise in what NOT to do in the production/mixing department, and while California Free Ride is a big step up from 2007’s Gasoline, it is also a step back in comparison to Superdeluxe. The CD is good, but when compared to Dirty Looks‘ extensive catalog I would rate it somewhere in the middle, and I have to wonder how much better it could have been with Lidel laying down some three-chord simplicity.