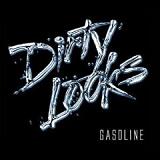 Production:
Produced by One Louder Music.

Review:
2007 saw the return of one of the best sleaze bands ever, Dirty Looks. Hard rock fans will be hard pressed to find more satisfying CDs than Cool From The Wire, Turn Of The Screw or Five Easy Pieces. Those albums represented Dirty Looks at their creative peak, but that was fifteen years ago. So the question is, can these cult legends regain their former glory with Gasoline, or will it be a muddled mess like some of their later release?

The answer to that question is a bit of both. The songs are here, vocalist Henrik Ostergaard sounds the exact same as he did so many years ago, and the production still leaves something to be desired. There really is no excuse for a poor production job in this day and age, as even talentless hacks sitting behind their computer can use programs to make their crap sound somewhat respectable. But if you can get past the substandard production and mix then Gasoline might be exactly what you were looking for from the band.

“Doesn’t Count The Juice”, “2nd Chance (Didn’t Take It)”, and “If The World Stopped Spinning” all bring back memories of Dirty Looks‘ greatness, and the later sounds like it was ripped straight from the Cool From The Wire recording sessions. The only song that is a complete letdown is “Over Me”, which is just a mess of sound. Guitarist Paul Lidel is back in the fold and he has always had a knack for recreating AC/DC inspired riffs and also making an appearance is his former Broken Teeth bandmate Jason McMaster.

If you plan on shelling out some cash for this disc, make sure you pick up the Perris Records reissue, because the bonus tracks are two of the better songs here. I’m happy that Dirty Looks is back, as they have always been one of my favorites. I just hope that next time Henrik and company get a producer that can clean up these songs a bit, that alone would have turned Gasoline from a good CD to a great one.