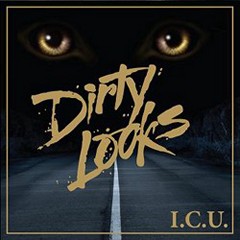 Review:
I was eagerly anticipating the new Dirty Looks CD for three reasons; the first is that it was being touted as the band’s ‘heaviest album to date’, the second is that Dirty Looks have always been one of my favorite groups with an impressive catalogue to live up to, and the third is that I.C.U. represents the final studio recordings of bassist Greg Pianka who tragically passed away in a February bar stabbing. Because of those reasons the expectations for this CD were very high.

One thing that has annoyed me about Dirty Looks over the years is their piss-poor production jobs. I.C.U. is a little different in that regard — the disc has a very bass heavy production which gives the album a live in the studio sound. It’s not perfect, and while it could be better, the album mix does give these seasoned veterans their heaviest sound ever. The thumping beat of the opening track lets you know you’re in for something special, and then frontman Henrik Ostergaard starts barking with his signature cantankerous snarl. “Special” opens up with some Cool From the Wire era riffing before morphing into something that is slightly too modern for Dirty Looks, but “Sugar Pie” brings things back on the right track. “Got A Ticket” succeeds with a killer guitar riff and builds itself up to the point of explosion while “Only Friend” shows a completely new side to Dirty Looks. Layered with piano and strings, “Only Friend” is a majestic number that mixes things up yet remains heavy as hell.

The new songs aren’t the only ones given a chunky sound. The Turtles‘ hit single “Happy Together” is completely metalized, but doesn’t work as well as the cover of Norman Greenbaum‘s “Spirit In The Sky” — you can tell Henrik and company are having fun destroying this classic. For a band that has been compared to AC/DC throughout their career (thanks mainly to the song “Oh Ruby”), Dirty Looks‘ cover of “Down Payment Blues” isn’t as true to the original as one would expect.

The biggest fault with I.C.U. is the lack of new material, as the ten track CD contains three covers versions and one live version of a fairly obscure song from Dirty Looks‘ past. But with that being said, as a whole this CD could be the group’s best work since 1994, and it is definitely a worthy addition to the ever growing Dirty Looks catalogue. Which brings us back to the original selling point of I.C.U. — is this in fact the band’s ‘heaviest album to date’? You could argue that point when it comes to the songwriting, but sonically there is no doubt that the promotional department told the truth this time… Dirty Looks has never been heavier than they are on I.C.U.