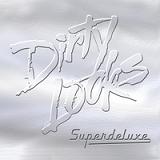 Review:
The one thing that has plagued Dirty Looks for what seems like an eternity has finally been corrected (aside from a couple of tracks), and that is a subpar production. Personally I’m not a fan of a slick production, but Dirty Looks‘ last few releases have been on the opposite side of the spectrum from slick, they have been muddy to say the least. With Superdeluxe that problem is finally fixed and makes for a much better listening experience.

Superdeluxe is the band’s second release in mere months and this time they have three classic members back with the return of drummer Jack Pyers. And right from the beginning of “A Million Miles” you can see what a great addition he is. Vocalist Henrik Ostergaard‘s voice is still in excellent shape as he slurs his words like a drunken sailor, he hasn’t lost his touch after over twenty years of screaming out cult classics. Also, one can’t review a Dirty Looks CD without mentioning guitarist Paul Lidel, who has always had a knack for laying down AC/DC sounding riffs without being limited to three chords.

A band like Dirty Looks is always going to be judge by their vast catalogue of material, so I’ll briefly play along. I’d be lying if I told you that Superdeluxe was as good as Cool From The Wire or Five Easy Pieces. But with that being said, this CD is arguably the group’s best work since 1992. The result is an album that falls somewhere in the middle of Dirty Looks albums, not their best and far from their worst.

Songs such as “Bring Me Down”, “A Million Miles”, “Dead Movie Star”, and my personal favorite “Blue Light” will be excellent additions to the Dirty Looks live repertoire. All the songs are hard rocking and have a heavy crunch to them, two qualities that have always made me a fan of this band.

It’s about time Dirty Looks gave one of their albums a proper production, as it makes a world of difference for the listener. Now I can officially say that Dirty Looks is back rocking like only they know how.