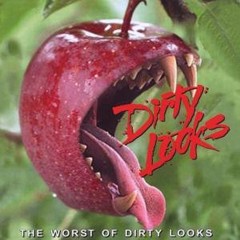 Review:
By calling a release the ‘worst of’ no one can really bitch if it doesn’t live up to expectations. In the case of Dirty Looks‘ first ever best-of release, the results are mixed. I’m not blaming the band though because this looks like a classic case of a group being unable to get record label permission to release their own music.

Some of Dirty Looks most popular songs, such as “Oh Ruby”, “Cool From the Wire” and “Nobody Rides For Free”, are included here, but as live tracks. That’s not such a big deal because the live versions sound good, but someone being introduced to Dirty Looks through this greatest hits package would have been better served with the classic recordings. One other thing that I noticed was that the booklet only contains lyrics to the band’s independently released songs. Add those observations to the fact that this was originally slated to be a double CD collection and it just screams major label interference.

It’s too bad really, because a collection of Dirty Looks‘ greatest tracks would go down as a must have…the band has been THAT good over the years. As it is, The Worst Of Dirty Looks is a great collection of hard rock masterpieces, but not quite the caliber of release that Henrik Ostergaard and company truly deserve. There are a lot of killer songs included here, and I was happy to see ones from little known albums such as One Bad Leg and Rip It Out included. Also, kicking off the entire affair with “Blue Tequila”, one of my favorite Dirty Looks songs, was a stroke of genius. However, missing are songs from the band’s last three studio CDs and their early independent albums.

For hardcore fans, The Worst Of Dirty Looks is a letdown because we know it could have been so much better. There has to be some gems leftover in Dirty Looks‘ vaults during their long and storied career, but nothing is found here. How cool would it have been to get treated to some of the scrapped Beau Hill produced Turn of the Screw songs, alternate takes, or a couple of the independent tracks to promote their recent re-release? The most disappointing thing about this CD isn’t what is on it, but what was left off.