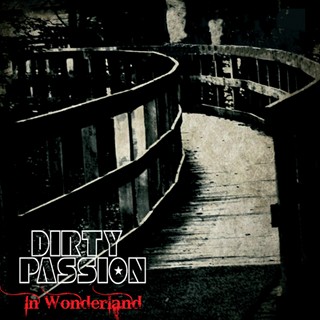 Review:
Swedish rock band Dirty Passion have plenty of live experience, playing Denmark, Germany and the UK to name a few while supporting such bands as Enuff Z’Nuff and Saxon. Their latest album In Wonderland is a blend of punk, sleaze and dirty glam — though the poor production and lack of bass lets down what otherwise could be a solid release.

“Into The Wild” is a rough and rocking opener, though Kriss Lohikoski Svensson‘s vocals are a little grating on the ear, and while catchy the production feels like it’s still at demo level. “Dead End” has some great licks by guitarist Christopher ‘Chrisse’ Olsson and the backing vocals are just what you want to hear on a hard rock album — thick, grungy and catchy — and while the track is enjoyable and heavy, the production and unclear mix once again really lets it down. Things get better on “Lovers Lane”, a more melodic and clearer sounding song, and Dirty Passion prove that their songwriting has improved over their previous release with “When Darkness Falls” — a slow, husky starter and great emotional track with a strong vocal rhythm from the outset.

“Sinner” is a weaker track, with Olsson‘s guitar work in the background distracting from the less-solid melody and backing vocals in the foreground but “Make It Last” is stronger, if a little dragging in places. I’ve written before about Dirty Passion‘s songs being too long and In Wonderland is no different — about half-way through the album the tracks don’t have enough to stand on their own feet and keep it exciting and new.

“Addicted” is a mellow song and the first real, confident performance from Svensson, especially with little instrumental backing at first. It’s one of the strongest tracks on the album, if not one of the most conventional, and Olsson‘s sparse guitar work is fantastically effective. The one let down? It’s too long. “Daughter Of The Reaper” takes you back to the rock and the grit, and sadly, the rough-cut, veiled-sounding mix — the bass runs underneath nicely though the track passes you by without too much impact. “Light Of The Candle” is catchier — the melody flows, the drums drive you, and there’s a climactic chorus, however if the production and mix were better the backing vocals and energy in the chorus would be more cemented.

The album’s two closing tracks, “Stay” and “Shadowland”, are a mixed bag. “Stay” is generally good — I love the vocals, melody and undercurrent of Nasty‘s bass, but the backing vocals are out of place and overcrowd the song. “Shadowland” is a whole five minutes, and for those of you who won’t reach the end the vocals are touch-and-go in the higher register and it lacks the edge to be a great closer. It’s a shame, however the song doesn’t ruin the album.

Overall, there are some good strong tracks on In Wonderland and Dirty Passion deserves to show them off. However, the clouded mix lets the whole sound down and makes it a much weaker sounding album than it really is. Potentially Dirty Passion could produce something special, but I’m not yet convinced they’ll be able to pull it out of the bag.