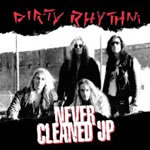 Review:
Can someone explain to me why the newest Skid Row disc didn’t sound this good? Now I realize that Never Cleaned Up is a collection of songs that were tucked inside the Dirty Rhythm vault, but what a great collection it is! I still say these guys deserve a high placing in the most underrated hair band list.

With a touch of the afore-mentioned Skid Row mixed with some Cry Wolf, Dirty Rhythm deliver the type of music that ruled the charts in the late 80s, but also add enough sleaze to make people like me happy. It is guitar-driven hard rock not that far removed from bands like Sweet F.A. – bands that were just dirty enough to be left behind by the mainstream yet had enough hooks and pop sensibilities to lead listeners into believing they had a shot at making it big.

Dirty Rhythm never did make it big, hell they barely even made it small. But their lack of success wasn’t due to songs as their debut Hard As A Rock and the leftovers on Never Cleaned Up demonstrate. These long forgotten songs prove once again that Dirty Rhythm had plenty of talent to reach the big-time, but sometimes the stars don’t align properly. “Bad Blood” is really the only song that lets me down here (not surprisingly it is the slowest), but is quickly forgiven when “Addicted To Ya”, “Wild Child” and the best of the bunch “Funky Little Sister” come screaming out of the speakers.

My only complaint with Never Cleaned Up is the CD length. It seems like a bit of a tease only having six tracks hidden in the vaults, but in this case six is better than none. To make up for it an old video of “Feel The Fire”, complete with leggy 80s blond-bimbo, was thrown into the mix as well as the typical expanded booklets Suncity Records is known for. Hair metal lovers that long for the return of the kick ass bands of years gone by should be picking this up – actually, they should already have it! What are you waiting for?