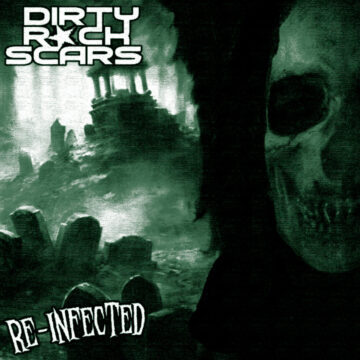 Review:
It takes guts to come up with original songs and release them for the world to hear. Back in the day, I wrote some melodies and lyrics but they have never seen the light of day or materialized into actual completed songs. So anyone who does release their own material — whether it’s good or not — deserves some kudos in that regard. A few years ago, I had to write a very difficult review. I was reviewing an album largely composed by a talented Sleaze Roxx writer who had contributed some comprehensive and in-depth interviews in the past. Lipstick spearheaded by frontman / occasional Sleaze Roxx writer Greg Troyan had just released their second full-length studio album Lipstick II and although there were some good moments on the record, for the most part, I just couldn’t get into it. This unfortunately is also the case with Dirty Rock Scars‘ latest offering — a seven-song EP titled Re-Infected — which is spearheaded by one of the most prolific Sleaze Roxx writers in the last few years — John Stoney Cannon. Stoney handled the lead vocals, played acoustic guitar, wrote almost all of the songs and produced the EP so while it is a band effort, Dirty Rock Scars‘ latest EP feels like Stoney‘s baby.

I did feel some trepidation when Stoney asked if I wanted to review Dirty Rock Scars‘ EP Re-Infected since I already knew that I wasn’t enamoured by the material that I had previously heard. In addition, if Stoney wasn’t the man behind the band, I would have probably concluded that Dirty Rock Scars‘ songs do not fall within “Sleaze Roxx‘s musical scope.” Those last few words may strike a chord for some as those are the words that I use whenever I feel that an artist or band’s music is outside what Sleaze Roxx would normally cover. It’s really a subjective test on my part with no set criteria. Sometimes, artists push back and ask why but the reality is that once the decision has been made, that’s it. Listening to Re-Infected, I feel that if Stoney wasn’t the person behind Dirty Rock Scars, there wouldn’t be enough in the songs for me to conclude that they fit “Sleaze Roxx‘s musical scope.”

Stoney has reviewed a shitload of albums for Sleaze Roxx including some that I would consider outside the box for the website such as David Bowie‘s The Rise And Fall Of Ziggy Stardust & The Spiders From Mars. To me, that’s not the usual Sleaze Roxx musical fare but it’s a classic album worthy of being reviewed on Sleaze Roxx and because Stone Cold said so… or I mean Stoney suggested so. I suspect that Stoney will likely appreciate the wrestling analogy since Dirty Rock Scars premiered their video for their song “Infected F1” at the Viral Pro Wrestling event dubbed Survival in Thomson, Georgia about three and a half years ago. The reality is that Stoney has a much wider interest in musical genres than I do and I think that this manifests itself on Re-Infected. As it turns out, there are only a few songs that I think could fall within Sleaze Roxx‘s musical scope on Re-Infected consisting of “I Walked With A Zombie”, “Drop Dead Gorgeous” and “Re-Infected”, and not surprisingly, those are my favourites by far on the EP. Re-Infected starts with the short instrumental “The Return of The Sickness” which appears to have some sirens wailing and some “Mr. Roboto” like voices. “I Walked With A Zombie” has a nice melody to it and reminds me of vintage and/or a deep Alice Cooper cut. “Wake The Red” doesn’t do much for me and unfortunately takes up more than five minutes and a half of the EP, which is just under 24 minutes in length.

“Drop Dead Gorgeous” reminds me a little bit of a Tom Petty & The Heartbreakers song at times with the “Hey, hey” part. “Pick Your Brain” is long and drawn out topping five minutes and suffers from unfortunately what sounds like muffled production. I don’t know what was the rationale behind doing a one-minute reprise of “I Walked With A Zombie” but having three songs between the original part is kind of weird. “Re-Infected” is the best and most energetic song on the EP although it feels kind of busy sometime with a lot going on all at once. I’ve never been into the horror / zombie type themes so I can’t say that the subject matters adopted on Dirty Rock Scars‘ latest EP appeal to me.

Overall, I think the majority of Sleaze Roxx readers would have a difficult time getting into Dirty Rock Scars‘ EP Re-Infected and like I previously indicated, if it wasn’t for Stoney‘s involvement and his amazing contributions to Sleaze Roxx during the last few years, the EP would have likely received my oft-used message that the music does not fit “Sleaze Roxx‘s musical scope.”