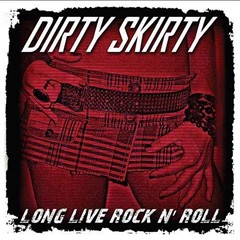 Review:
I don’t know much about Dirty Skirty aside from the fact they are from Florida, released their debut CD Long Live Rock N’ Roll earlier this year, and one of the most exciting new bands I’ve heard since The Last Vegas. Take equal amounts of Aerosmith, Buckcherry and Tesla and you will have the winning formula for Dirty Skirty‘s sound.

These young upstarts are both humble and honest, both with their attitude and music. In the liner notes the band states, “we think that individually we are average at best, but together we have created something extra special”. Calling Long Live Rock N’ Roll ‘extra special’ may even be an understatement as this disc rocks from start to finish with no filler to be found.

Few albums storm out of the gates as convincingly as Dirty Skirty, as the first five songs on this release are practically flawless. The opening track “Ride” is pure Aerosmith, both in the guitar swagger and the Steven Tyler imitation vocals. “King Sleaze” may be the album’s best, as the band increase the speed for some great unpretentious rock while “Red Light Go” follows right along – both songs have a ’70s vibe about them without sounding old or dated. “Dirty Angel” has one of the most memorable choruses on the CD ( “Playin’ With Girls” slightly beats it out) and is another scorcher while “Dirty Angel” concludes the five song onslaught with a sound tailor made for radio rotation next to Buckcherry‘s latest singles. The only time Dirty Skirty slows down is during “Spill Your Heart Out Tonight” which would be at home on any Tesla release.

For a relatively unknown band Dirty Skirty have stumbled upon a masterpiece. I honestly can’t say anything bad about Long Live Rock N’ Roll, it rolls along with a consistency that few bands ever capture. To the guy who recommended I check this young band out I owe you a drink. Independently released, I strongly suggest buying this album to help support the continuation of memorable hard rock music.. your money will go directly to the band instead of a heartless corporation. Rock has a bright future with groups like Dirty Skirty carrying the torch – this one is definitely a strong candidate for best of 2010!