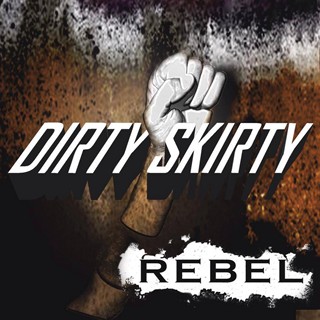 Review:
The year was 2010 — Dirty Skirty had quietly released their debut album and, proud of their accomplishment, decided to put the band to rest. That was until a Sleaze Roxx reader suggested I check out this little known Florida group, one that completely blew me away. At the time I knew nothing of Dirty Skirty, or even that they had already broken up, but a favorable review of Long Live Rock N’ Roll saw album sales escalate and gave the guys the motivation to continue their dreams!

If Sleaze Roxx was in fact the reason for the return of Dirty Skirty then the website has completely served its purpose. There is nothing better than supporting independent artists, the ones who do everything themselves and rely solely on word of mouth — and it is even more rewarding when the band in question is as good as Dirty Skirty. I was praying I wouldn’t have to shatter the band’s dreams in a review of their latest effort Rebel, but right from the opening chords of “Take It Or Leave It” I knew that wouldn’t be an issue.

While Long Live Rock N’ Roll was an unrelenting rock album front beginning to end, Rebel finds the band pushing their boundaries and expanding their sound. Of course you have Buckcherry inspired rockers like “Take It Or Leave It”, the viciously delicious “Devil Dancer”, the straight-forward “Dr. Dirty”, the driving “You Got It & I Want It”, and a surprising version of AC/DC‘s “Girls Got Rhythm” — you either have to be insane or have big balls to cover one of the best songs ever put to tape, I’ll let you decide for yourself which category Dirty Skirty fits into.

Dirty Skirty broaden their horizons throughout the second half of Rebel with several different flavors. “Candy Land” is a moody little guitar driven number that reminds me of Junkyard in their heyday and “Always My Girl” is the type of semi-ballad that Buckcherry would get ample plays with on today’s rock radio. Finally, the acoustically driven “Tallahassee” pays homage to the band’s hometown with some cool lyrics and really works well in the process.

“Someday I’m gonna write me a little bit of record, ain’t no one ever gonna hear,” Luke Stephens sings in his best Jimmi Bleacher/Salty Dog inspired voice during “Tallahassee”, and its sadly closer to the truth than any of us want to admit — although I’m all in favor of changing that! Now get off your ass and support independent music by purchasing Dirty Skirty‘s Rebel — or more appropriately, sit on your ass and order it online because finding this disc at your local record store is probably a fruitless endeavor.