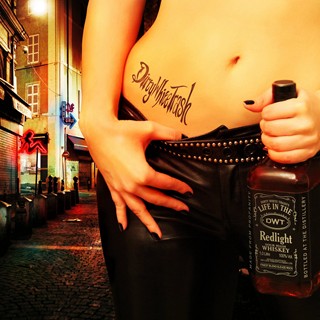 Review:
In the late ’90s a band by the name of Wolfsbane took the English metal scene by storm with their energetic live shows, however they were never able to capture the intensity of their live shows on album until it was too late. Twenty years later comes another English act, Dirty White Trash, with a debut EP that Wolfsbane would have killed for in their heyday.

Dirty White Trash totally live up to their name on Life In The Redlight, while playing aggressive and attitude driven sleaze rock with the same conviction of bands such as the Crank County Daredevils. It is the sexy album artwork that immediately catches your eye, but the music itself is the perfect companion to hot girls, Jack Daniels whiskey, nude clubs and filthy streets. It’s as if a time capsule left in some dark and sin infested back-alley suddenly got rediscovered and out popped four musicians pissed off because a homeless bum has been pissing all over them for the last 20 years — so, like a genie who has been trapped inside his bottle for way too long, Dirty White Trash emerge with a chip on their shoulder… and a handful of venom-spitting songs.

“Breakin’ Down The Walls” kicks things off and is a full-throttle sleaze anthem with a chugging guitar riff, pounding drums and a gang-vocal chorus. After stumbling on “Get Dirty” the disc fires up again during “Sweet Addiction”, another barn-burner, before drifting into Sleeze Beez territory on “Hollywood Honey”. A pounding beat kicks off “Queen Of Sleaze” which is a sleazy tune that accurately portrays the type of groupie Dirty White Trash would find in smoke-filled and alcohol-stenched bars around the world. Wrapping things up on another high note is “Freak And Weirdos”, and thus ending 6 songs of damn near sleaze perfection.

I keep coming back to Wolfsbane while listening to the EP because vocalist Sin reminds me of Blaze Bayley — which is a good thing (although Iron Maiden fans may disagree). Wolfsbane mastered the live arena but was unable to transfer that to CD — Dirty White Trash has perfectly captured sleaze on disc and if they are able to bring these songs to life onstage they could easily be the next big thing in hard rock. The underground has new cult heroes… and they are Dirty White Trash!