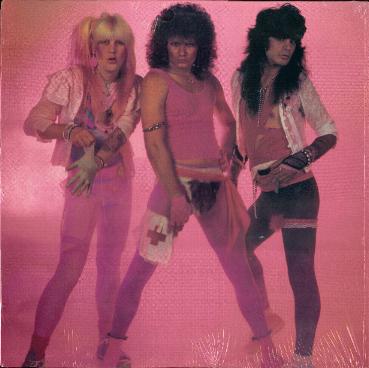 Review:
Let’s examine what the fuck we have here. A trio of guys named Dizzy Bitch (with such witty names as Johnny Lust and the laughable Tim Tation), and album called In The Pink, a song title of “Goin’ Down” and a fashion sense that makes Ru’Paul look conservative! I didn’t even realize fur cod-pieces were ever made – and why does the one dude have what appears to be a piece of a pink feather boa stuck to his crotch (or is it actually part of his garter…I’m afraid to look)?? Only in the decadent 80’s could something like Dizzy Bitch have come to life.

As fucking atrocious as all that sounds (and believe me, mere words barely touch the horrific nature of this band), musically they are kinda fun! Who would have guessed that these fashion fruit-loops were capable of playing listenable music? The band plays a combination of party pop-rock, as shown on “Double Time”, and darker sleazier material like on “Goin’ Down” which comes complete with female moaning (or is it the band themselves?). Dizzy Bitch isn’t reinventing the wheel here, they are just playing music that could be compared to Teeze or a more commercial Diamond Rexx.

This LP is likely near impossible to find, but if you ever see it snatch it up. But be warned, once you get your hand on this gem you’ll want a blow-dryer close…because I guarantee you will piss yourself laughing! God help us all.