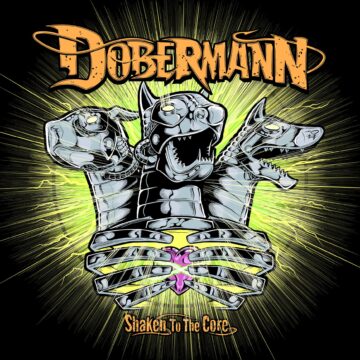 DOBERMANN
SHAKEN TO THE CORE
To be released on June 11, 2021 (Wild Mondays Music / Horus Music UK)

Review:
Power trio Dobermann have built quite a reputation since their last album Pure Breed including an exhaustive, pre-pandemic touring schedule that saw them open for bands such as Great White and The Quireboys to some acclaim, and leading to this release helmed by renowned producer Alessandro Del Vecchio.

Things start in exuberant style with the blues style boogie of the title track which includes fine guitar breaks from Valerio ‘Ritchie’ Mohicana and  leads smartly into the swaggering “Staring At The Black Road” that has echoes of “Money Maker” era Black Crowes,  followed by the sleazy stomp of “Stiff Upper Lip”, complete with fine ensemble playing and a neat line in late night vocal snarl from Paul De Bello.

So far so good. Unfortunately, the good work is seemingly undone by “Dropping Like Flies” which sounds like an extended jam in a variety of styles that simply sound out of place and incomplete. Fine bass playing from De Bello again, slightly redeems the rather ordinary “Over The Top”, but the lengthy and pedestrian “Talk To The Dust” and the equally dull “Rolling With The Times” will probably have you reaching for the skip button as they are so uninteresting.

“Summer Devil” opens well but quickly follows suit and runs out of ideas, despite more fine playing from all concerned. “Rock Steady” is up next and has De Bello’s fine, funky bass and more solid work from Antonio Burzotta on drums but is sadly just another generic, uninspiring track; the same can also be said of  “Run For Shade” that at least initially attempts to escape from the rut with a lively opening guitar salvo. “Last Man Standing” though, sounds like a completely different band, with keyboards and plaintive Mad Max style lyrics about “the end of rock as the sun goes down” and is a surprisingly appealing oddity to end proceedings.

The trio play consistently well throughout, with De Bello’s bass playing and vocals standing out on most tracks alongside fine guitar breaks from Mohicana and the reliable solidity of Burzotta. The problem being that the songs themselves just aren’t memorable enough after track three, and the production seems to lack that certain something to raise them above the level of ordinariness. That in itself is a great shame because the album started with such promise but ultimately fails to fulfil its own potential.

Dobermann‘s “Shaken To The Core” video: