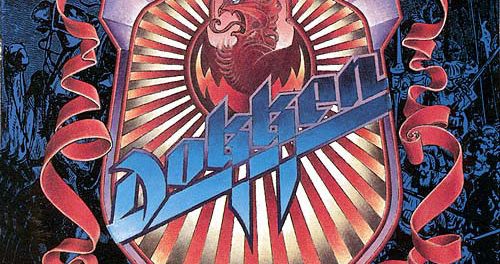 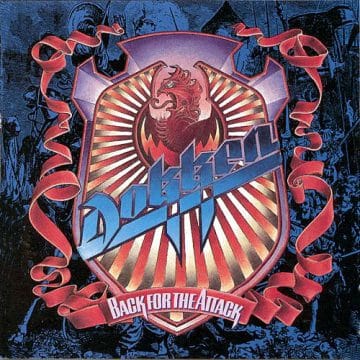 DOKKEN
BACK FOR THE ATTACK
Released on November 17, 1987 (Elektra)

Review:
In 1987, Dokken released the super-duper long Back For The Attack and to this day, I still remember the ads for it saying it was over 60 minutes of ‘Rokken with Dokken!” Now that’s giving the fanbase what they want. This was easily a quick purchase upon release and I, along with many others, scooped it up quick when it hit the shelves… If we’re keeping score, it went to #13 on the U.S charts and to #25 on the Canadian charts.

George Lynch, one of the ’80s guitar heroes, leads off with a superstar riff that charges out of the gate and that would be ‘Kiss Of Death.” George is cranked and blasting off like a rocket along with Jeff Pilson and Mick Brown leading the charge for Don Dokken and his melodic rock voice to come in and take over. Don sings the tale of the ‘Kiss Of Death” and it’s  about aids and wowzers! Has Don been hanging out with Bono circa 1987 in preaching? Nah…..this is Dokken! On one hand, Don will tell you all be careful about what you’re doing while on the other hand, Dokken and staff were stocking up on party treats! Great opening track and Lynch lifts off….

“Prisoner” being track two is one of mine and I believe Mikey Ladano‘s fav’s as well! It seems to be a forgotten Dokken track as I don’t think they ever tackled this live but it oozes cool! Lynch once again sets his guitar ablaze right off the bat with a great intro solo while the verses are chill and the chorus take us into money shot…

“Night By Night” keeps the party going. It’s a great song and like many a good band, the song is built by the riff. This mid-tempo rocker features some good vocals by Don and George of course takes over. Like all good thing syrupy from the ’80s, “Night By Night” will keep you humming all night long…. Ummmm, that’s a stretch but if you were my age when this album was released (I turned 20 in 1987), you’ll know what I mean!

Yep. I dig “Standing In the Shadows.” The boys dig deep and come up with a real good pre-chorus which is Dokken catchy. Lynch plays another one of my fav solos here. That is the thing with these guys and Ratt. Both of these bands had great lead guitar players — Ratt with Warren DeMartini and Lynch hanging around Dokken — plus, they had the songs to back it up.

“Heaven Sent” is melodic Dokken at its best. George takes a different approach and instead of playing guitar hero, he takes a back seat, plays some nice clean electric almost Ed Halen like picking. The chorus is an excellent written piece of rock. The song falls far from wimpy as Brown keeps the song moving at a decent clip!

“Mr. Scary” is George locking Don out of the studio and slamming down a bunch of riff n’ rolls in a musical tour de force with Mick slamming double bass drums while Pilson plays his simple Simon bass licks and Lynch solos, solos and solos…..

That’s just side one!

“So Many Tears” is a Dokken melodic metal to a T! Great straight ahead rocker to start things on side two! Dokken ’87 was a great band and the friggin’ egos between the guitar player and singer destroyed this band. At the time, I always thought why can’t Dokken be like Sam Van Halen in getting along and such. Boy, was I a ding a ling in thinking that way! George and Don combusted as they were about to really make the move from opening act into headlining arenas and Kaboom! They all went solo and came nowhere near what they had as a unit in Dokken.

For myself, only the next three tracks “Lost Behind The Wall,” ‘Stop Fighting Love” and “Cry Of The Gypsy” are OK tracks. Nothing I really want to discuss about them but that there OK. Filler like perhaps? I dunno. When I spun them for this review after not listening to them for years, they didn’t really do it. Even back in ’87-’88, I recall these songs being a slog to get through…

“Sleepless Nights” — Wowzers! What a great end of the album. Gem! Lynch sets sail with a sleazy L.A. like riff and we’re off! This mid-paced walloper has a real good chorus and yes, as per protocol, whether Don likes it or not, George carries a lot of the Dokken albums with his playing. Real cool use of some percussion during the chorus as well. Bona fide winner! “Sleepless Nights” puts the Dokken train back on track after the slight derailment of the previous three songs!

“Dream Warriors” — Another decent tune, which was included here, as I didn’t ever seldom buy soundtrack albums. Come to think of it, T-bone had a pretty decent one back in the day which I should review sometime. “Dream Warriors” is a decent paced end of the album throwdown track album which the boys hang out with Freddy Kruger…. Read an interesting  blurb (I think it was in the excellent ‘I Want My MTV’ book) that when Dokken was filming the video to this track. I read something about Krugers‘ finger nails/blow and Dokken? Ummm you figure it out…….HA!

Dokken put out a fine album stuffed with 13 tracks! I think if they would have shaved of the 3 song’s that didn’t do it for me they would have still had a decent 10 song album which was a lot stronger than what others were putting out at the time…