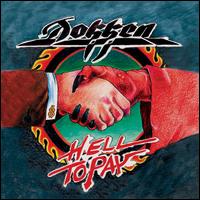 Review:
Who among us hasn’t cried to “Alone Again”, kissed our girlfriend to “In My Dreams”, or banged our head riotously to “Tooth And Nail”? I’ve been a fan of Dokken for what feels like forever and their classic records hold a special place on my shelf and in my heart. But, the past decade has been a touch and go year in terms of Dokken‘s new material. Dysfunctional (1995) was a solid album, but Shadow Life (1997) was not. Erase The Slate (1999) was perhaps my favorite Dokken record, but Long Way Home (2002) is probably my least favorite. If history indeed does repeat itself, this album should be good. But is it?

“The Last Goodbye”, the opening track, is a very well written and performed song. But the track says two things about the record to follow. One, Jon Levin is every bit the guitar player George Lynch is — and two, the monotone feel of Dokken‘s most recent release Long Way Home is still somewhat prevalent in Don‘s voice. That said, the opening track is surprisingly good, despite the monotone feel.

“Don’t Bring Me Down” is the first and only sample I downloaded from the official Dokken website. I’ll go on record as saying if this song was indicative of what the whole record would sound and feel like, this would easily be a million seller. Don kicks the monotone out of his pipes and belts this one out sounding like the Don we all know and love.

The lyrics of “Escape” are probably the best Don has come up with since “Maddest Hatter” off Erase The Slate. The song sounds a touch too modern for my taste musically. But despite my original feeling of not wanting to like the song for that reason, I found myself singing the chorus by verse two. This song was made for the radio. I hope I hear it on there!

“Haunted” is up next and this one rocks. A cool intro and a blazing guitar job by Levin mixed with Don‘s classic vengeful brokenhearted lyrics make this fit for a slot on an inevitable new “Dokken’s Greatest Hits.” I dig it!

“Prozac Nation” sounds fresh off Dysfunctional. If you liked that record, you’ll like this song. I did and I do!

“Care For You” is the ballad off the album. Lyrically, it’s another good brokenhearted Dokken ballad. I think a lot who liked “Only You” off the new Tesla record will like this song as well. But, it doesn’t have the hook of “Alone Again”.

“Better Off Before” is a cool song and there is absolutely no monotone to Don‘s voice. The next tracks — “Still I’m Sad”, “I Surrender”, and “Letter To Home” — see the return of the monotone, though. I think the songs are good for what they are but it leaves the bitter taste of Long Way Home in your mouth. Rather boring, quite frankly.

“Can You See” is a fair song, but Don once again sings of love gone bad. This many songs about that topic makes me wonder what has gone wrong in Don‘s love life of late. The song is, as I said, fair but not as good as the high points of the record.

“Care for You” closes out the record. This is an acoustic version with piano. Ultimately, I like this version better, but I still don’t think the song has a strong enough hook to be their new “Alone Again”.

A saying I always am quick to shout at people is, “Those who don’t learn from their mistakes are destined to repeat them.” Long Way Home was a mistake in every sense of the word. This album distances itself from that monotone feel a little bit but not nearly enough for my taste. Hardcore Dokken fans will dig the songs I do. There might be some new rock fans that will like the more monotone sounding songs but that stuff bores me because I know better.

Because I hate when the lead singer is the only thing judged when talking about a band (see Bon Jovi) I want to close by pointing out how great Jon Levin (Warlock), Barry Sparks (Ted Nugent), and long-time Dokken drummer “Wild” Mick Brown sound. Levin is the best guitarist Dokken has had since the underrated Reb Beach and surpasses the overrated George Lynch. As for Don Dokken, say what you want about him — most former band members do. The bottom line is Don Dokken has a way of staying alive out there while former band members have produced nothing but failed or soon to fail solo ventures that never even come close to measuring up. I’m still rockin’ with Dokken!