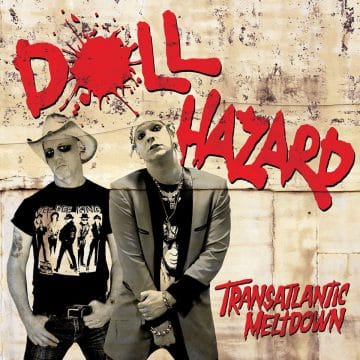 Review:
The surprise union of Suicide Bombers‘ frontman Chris Damien Doll and Dirtbag Republic drummer/singer Sandy Hazard as Doll Hazard is a very intriguing one. Both singers are arguably the leaders and chief architects behind their respective groups. Each of their respective bands have released new studio albums earlier this year — Suicide Bombers with Suicide Idols and Dirtbag Republic with Downtown Eastside — which are arguably some of this year’s best records. Perhaps the most intriguing thing for me about their union is that each brings something that the other lacked.

As much as I love Dirtbag Republic‘s Downtown Eastside, it’s kind of one dimensional in that Hazard, lead guitarist Mick Wood and company deliver very enjoyable pedal to the metal sleazy rocker after another — but with no great variation from one song to another. In fact, there appears to be a bit of a formula or blueprint for the songs on Downtown Eastside and it’s followed almost to a T each time. And as much as I love Suicide Bombers‘ Suicide Idols — which had way more variety than Dirtbag Republic‘s Downtown Eastside — I felt that it would have been nice for the songs to be sped up a little more. This is where Hazard could help Doll and vice-versa. I was pretty sure that Hazard‘s presence would mean speedier punk like songs and having Doll on board would mean some more variety and some cool guitar riffs. And that is exactly what has happened as Doll and Hazard have essentially helped shore up each other’s — for lack of better word — “weaknesses.”

If you’ve heard Downtown Eastside, you know that Hazard has a distinctive voice that works really well with some quality background vocals. For that reason and interestingly enough, I find that Doll Hazard sound closer to Dirtbag Republic than Suicide Bombers. Perhaps it’s because all of the songs where Hazard handles lead vocals are speedy sleazy rockers once again. The big difference with the tracks where Hazard sings compared to his work on Downtown Eastside is that there is more variety. Take for instance “Transatlantic Meltdown” with its “Ooooh Ooooh Ooooh” parts or “Rock ‘N’ Roll Prostitute” with its underlying guitar riff intro, which is very Suicide Bombers like. Doll has apparently been pushed a little out of his comfort zone as well by Hazard as most of the songs where Doll handles the lead vocals are speedier affairs. Take for instance “Fire Gasoline” and “21 Grams (Off My Shoulders)” which are faster paced than just about any track that you’ll find on Suicide Idols. So pretty much on every track except for “Doghouse” (which I will touch on very soon), the indie veterans help each other to bring the best in each other.

The surprise song on Transatlantic Meltdown is “Doghouse” which is a faster paced ballad with some beautiful piano melodies played throughout. I would have never expected Hazard to be playing on a track like this. In any case, after a few listens, the song has really grown on me. Overall, there is not one weak track on Transatlantic Meltdown although the last two “You’re In My Head” and “Sci-Fi Child” aren’t quite at the level of the others. Every song is at least good with some at the great level such as “Rock ‘N’ Roll Prostitute,” “Fire Gasoline,” “Walk On Water” and “21 Grams (Off My Shoulders).” Getting a few talented musicians together to record an album is no guarantee that a good or even great record will be the outcome as Frontiers Music Srl is slowly learning but in this case, the union of Doll and Hazard is a resounding success!