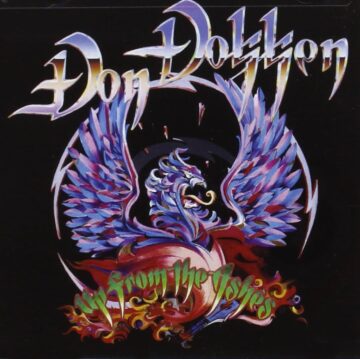 DON DOKKEN
UP FROM THE ASHES
Released on October 21, 1990 (Geffen Records)

Review:
“It’s one of the best records that I have ever been a part of. I had such a fucking amazing band — Peter Baltes from Accept, John Norum [Europe], Billy White [Watchtower] and Mikkey Dee [King Diamond]. That was another album that took a long time to make, because I wanted to make an amazing record. It took us about nine months to make that one. It didn’t sell anywhere near what it should have. That was going to be the next Dokken album, then I lost my name. The band sued me and I couldn’t even use my own name. So I could call it ‘Don Dokken’ but I couldn’t call it ‘Dokken’? Give me a break, that’s my name,” said an annoyed Don Dokken when I spoke with him in July of 2020 for Metal Titans.

By the time 1990 rolled around, Dokken, the band, was over. George Lynch and ‘Wild’ Mick Brown had formed Lynch Mob and had released their debut Wicked Sensation. Jeff Pilson was working on War & Peace, and playing with the McAuley Schenker Group. Don Dokken as he said had assembled a united nations ‘supergroup’ of sorts with the aforementioned musicians listed. While Dokken looked to be over, we had two bands that rose from the ashes of the band’s demise — Lynch Mob and Don Dokken. One could make all sorts of excuses and reasons for the album tanking or underperforming. In this case, it wasn’t the talent pool. There were a handful of really good tunes, some that quite frankly didn’t hit the spot and I couldn’t connect with. Judging by the reception to the album when it was released, I wasn’t alone.

The name was there. The artwork was a nod to Back For The Attack which three years earlier in 1987 afforded Dokken the opportunity to tour stadiums as one of the support acts for the Sammy Hagar fronted Van Halen as they trekked across America that summer. Dokken were clicking and firing by on all cylinders. It seemed like Dokken would stand the test of time, even with the fabricated or at times, the very real internal conflict. Don gave us a little more insight on Up From The Ashes, “Geffen [Records] was pushing my album pretty well, then they just pulled the plug on promotion for Up From The Ashes. The label elected to concentrate on Nirvana and Guns N’ Roses.”

The first taste we got of Don Dokken (band) was the video clip for “Mirror Mirror” which was a very good tune but it paled in comparison from what we had already heard from Lynch Mob. Sure, it was the voice of Dokken, but it was Don Dokken ‘Lite’ in comparison to what he had done in the past, quite frankly. Up From The Ashes didn’t have the ‘firepower’ that you’d expect from the tandem of Norum and White. It was like a ‘paper tiger’ in that in print, this band should have decimated the singer’s previous namesake, but in reality, it didn’t. It was a little bit flat, extremely polished, which contributed to the vibe of the whole thing getting just sucked out of it. A ‘buzzkill.’

The blame however, shouldn’t be solely on Don’s shoulders. Wyn Davis (Great White) was the producer. John Kolodner who was responsible for resuscitating Aerosmith’s career was the A&R guy. Tom Zutaut who helped launch the career of Mötley Crüe and Guns N’ Roses, also had a hand in the final say on this album. It’s incredible how you can have that level of talent, some good songs, label experience, production and have this as the end result. I’m speechless. There were some highlights on Up From The Ashes such as “Crash ‘N Burn,” “Down In Flames,” “Mirror Mirror,” and my absolute favorite song on this album is “Give It Up.” Had that song been released two years prior, it would have been a hit. The same could be said for “Mirror Mirror,” in spite of the production.

“I didn’t want to be on Geffen anymore. I waited until John Kalodner became the president of Columbia (Records) and we were the first band that he signed. That’s how Dysfunctional was recorded. It was supposed to be a ‘solo’ record. George came back to the band, literally about a week before the record was done. He threw in a couple of solos on that. He didn’t have much to do with the writing for it. That’s what happened with Up From The Ashes,” sighs Don Dokken.  Up From The Ashes is a ‘good’ record. It could have been a ‘great’ record since the songs were there but the production just wasn’t. There was just some magic that happened when the classic line-up got together, as we would later hear on Dysfunctional even with limited input by Lynch in terms of songwriting. We’ll pick things up from there when it’s that album’s anniversary.