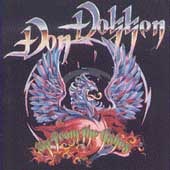 Review:
One of my favorite singers, Don Dokken came out with this solo album while Dokken was on hiatus. “Crash ‘N Burn”, “Living A Lie” and “Mirror Mirror” (the debut single that received limited airplay) really rock hard. “When Love Finds A Fool” and “Stay” (which was co-written by Mick Brown and originally supposed to be a Dokken song) show his emotional side.

Don had some very seasoned players on this album, as they had spent time in bands such as Accept, King Diamond and Europe. In fact at times it is John Norum‘s guitar playing that upstages the vocalist himself. The music on Up From The Ashes is an extension of Don‘s work with Dokken as he shares his emotions with us very well. I felt this album was very good and it gets two thumbs up!