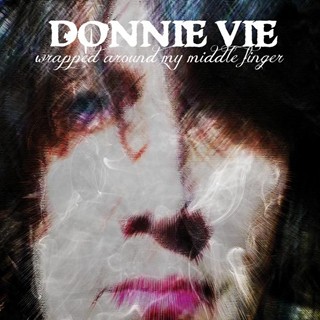 Review:
Donnie Vie is best known as the voice of the legendary Enuff Z’Nuff, a band who have managed to outlast most other groups of their genre and continually put out quality releases and tour worldwide. Donnie has already enjoyed some solo success — his debut album Just Enough had some of the most melodic tunes and touching ballads you’re likely to hear on one CD. Vie‘s latest release, Wrapped Around My Middle Finger, is out now on Cargo Records, and for those who might need a little persuasion… read on.

The title track is undoubtedly the heaviest song on the album, but in true Vie style it’s got a melodic verse before saving the onslaught for a heavy chorus loaded with harmonies — think of it as your updated “Rockin’ World”, and you’ll not be disappointed.

There’s some great feel-good and instantly likeable songs on this album — like “Lisa”, penned to Donnie‘s girlfriend who has to be given some credit for keeping him on the straight and narrow, “Rattle On”, which has such a catchy chorus and harmonies that will stay with you all day, and “Smokin Hot Lollipop”, which has been released before but gets its official place as the last foot tapper.

I’ll admit, Wrapped Around My Middle Finger did take me a little more time to get into than previous albums but maybe only because some of the songs have so much depth to them. In the past Donnie‘s releases haven’t had the big production, in fact they’ve been let down slightly, not by the songs themselves but by the lack of production and by cutting corners like using drum machines — however, that problem doesn’t exist here.

I guarantee you that “Lil’ Wonder” will capture you from the time Donnie sings “Open your heart” with that very familiar raspy and haunting vocal that diehard Enuff Z’Nuff fans love him for — it’s an incredibly deep ballad with quite an operatic feel. I’d also compare it to material that appeared on Strength, in fact there are a few occasions on this CD where I’ve compared songs to previous Enuff Z’Nuff albums. For instance I loved the album 1985 — I loved the old guitar amp sound on that and I’ve always compared Donnie‘s vocal sound on it to Elvis Costello. I think that’s a compliment, and “No Escape” definitely has that retro feel to it as does “Flames Of Love”. I wonder how long these tracks have been floating around in Donnie‘s head?

There’s also a surprise guest appearance from Kip Winger on the incredibly harmonious “Now Ya Know” and his vocal style actually works really well switching between him and Donnie to handle the pre-chorus before once again launching into a huge chorus.

For me, the stand out song on this album is once again a ballad, “Daddy’s Girl”. There’s something about this song, probably the fact the lyrics are very appropriate to anyone who has a daughter — they just mean a lot to me and my instinct as a father to be protective. I’ve always been in awe of Donnie and his ability to write ballads, he consistently produces these, and there are no throwaways… they’re all killers.

I was lucky enough to fly in and catch Donnie Vie in London last year on his solo tour and the setlist was probably the best I’ve ever seen him perform. Credit to him, he had the balls to play loads of songs that the fans have asked him to over the years and it made the show such a great experience. I know there is a huge back catalogue of Enuff Z’Nuff material out there, and it finally looks like the ‘anthology’ will see the light of day with 20 plus old tunes being released. Keep your ears tuned for some news on that.

But ‘enuff’ of Z’Nuff… and back to Donnie Vie. Yes, go out and buy this. Am I biased? Yes, probably, I don’t deny that, but I’m not going to lie to you about the quality of this album — it is good, very good. It has so many catchy numbers, yet it saves room for a couple of really huge songs. Its fast paced and its slow — its everything that you would expect from Donnie Vie it’s just that this time it’s all his and he should be pretty proud of his effort.