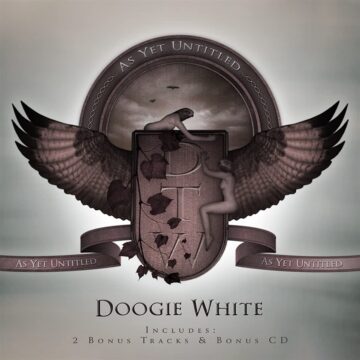 DOOGIE WHITE
AS YET UNTITLED
Released on June 4, 2021 (Store For Music)

Review:
A full decade on from its original release, the only solo album from journeyman Scottish singing, gun for hire, Doogie White has been reissued with two extra tracks and a bonus disc chock full of cover versions.

With an impressive CV to his credit including stints with Alcatrazz, Tank, Ritchie Blackmore’s Rainbow and Michael Schenker’s Temple of Rock to his credit, As Yet Untitled opens with “Come Taste The Band” which takes a while to get going but once it does, has the full on, fist waving, classic rock feel to it. “The Clairvoyant” follows with Doogie offering his tribute to Dio both vocally and lyrically, and two storming blues-era Whitesnake styled rockers in “Time Machine” and “Too Hot To Handle” giving the set a real lift for me.

We’re in Deep Purple style territory for both “Dreams Lie Down And Die” and the rather plodding “Judgement Day”, as well as an adequate but rather pointless cover of “Let’s Spend The Night Together”, before “Lonely” gets back to the business of proper rocking. “Land Of The Deceiver” is another Dio-esque track that passed me by in all honesty, and “This Flight Tonight” had yet more Gillan / Purple overtones. The two additional tracks for this release are “Long Gone” and “Secret Jesus” which, along with “Time Will Tell” were my favourites from a rather uneven, but solidly produced set that features stellar guest musicians of such calibre as Neil Murray, Tank’s Mick Tucker, and Patti Russo whose contributions to this obvious labour of love  are nothing less than excellent.

Disc 2 is, as I said, full of cover versions from Thin Lizzy’s “Emerald”  through to Iron Maiden’s “Bring Your Daughter To The Slaughter” — most of which I found unnecessary but then again I’m not a particularly big fan of covers albums anyway. If you are, then there is certainly more than enough to enjoy, especially the fine version of the always welcome “Crying In The Rain.” There is a really tender, poignant original entitled “Small Town Saturday Night” that was inexplicably left off the initial album but really shouldn’t have been,  as it is superb and showcases Mr. White’s vocal prowess in its finest, most fragile light.

The bottom line really is that if you like your classic rock in a Whitesnake / Gillan and even Free style, then you should check out this epic, 24 track double disc that will provide more than enough Doogie for your dollar and most of which is well worth hearing.