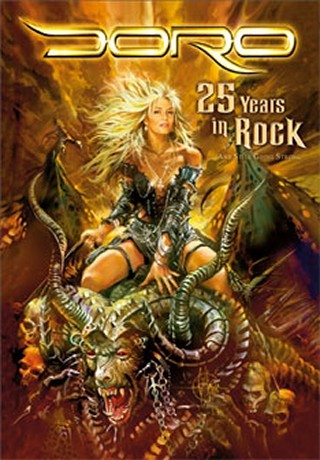 Review:
A good portion of North American metal fans are only familiar with Doro‘s early work with Warlock, which spawned the hit single “All We Are”. By 1989, Doro had gone solo and has released a string of albums since — however with the slowdown in popularity of heavy metal starting in the early 1990s Doro mostly toured in Europe, rarely venturing onto North American soil. I admit falling into the group mentioned above — a metal fan only familiar with Doro‘s Warlock work. Since Doro is going to be making one of her rare touring forays into North America in the coming months, I thought that this would be a good time to get familiar with her solo stuff. I readily admit that my ticket was purchased to see opening band Sister Sin more than anything else, but given Doro‘s track record in Warlock her solo stuff deserved a shot in advance of her upcoming show.

If you are going to purchase one of Doro‘s CDs or DVDs, 25 Years In Rock… And Still Going Strong is likely the ultimate starting point. With 25 songs (not counting the “Intro”, “Outro” or drum solo) on the DVD, including 13 from Doro‘s solo years, you certainly get a good overview of the best of Doro‘s work. Throw in nine songs from the Warlock days and three well done cover songs (the Judas Priest classic “Breaking The Law” and two Scorpions staples, “Big City Nights” and “Rock You Like A Hurricane”), you have one fantastic DVD. The bonus live CD is good as well, but is shrunk down to ten songs from that evening.

Opening with the Warlock classics, “Earthshaker Rock” and “I Rule The Ruins”, what any viewer quickly realizes is that Doro absolutely loves what she does and the big smile on her face will be a permanent fixture for the evening! When Doro sings, “You’re my family”, you truly feel that she means every word. Given that this was her 25th anniversary celebration show, Doro pulled out all the stops for this event. At the beginning of “The Night Of The Warlock” appeared this giant warlock’s head, arms and hands in the Eddie style from Iron Maiden — it was quite an amazing spectacle, and very fitting for the song.

Perhaps the best part of the 25 Years In Rock DVD are all the special guest appearances. The guests that do appear are not always the best known musicians (perhaps that is due to the concert location at Dusseldorf, Germany) but all of them add an extra element to the songs that they play on. The first to appear is lead vocalist Bobby ‘Blitz’ Ellsworth of Overkill, who delivers a spirited rendition of “Always Live To Win” with Doro — and is one of my favorites on the DVD. Other guest appearances include Sister Sin‘s Liv Jagrell and a slew of female metal rockers on “Celebrate”, Warrel Dane of Nevermore on “True As Steel”, Chris Boltendahl of Grave Digger and Axel Rudi Pell on “East Meets West”, the 1986 Warlock line-up on three songs, and of course Klaus Meine and Rudolf Schenker of the Scorpions during the covers of their songs.

25 Years In Rock… And Still Going Strong is packed with one great song after another and the energy throughout the show is quite evident. Slower songs such as “Above The Ashes” and the classic Warlock tune “Fur Immer” are just as well received as the faster ‘anthem’-like rockers. Other highlights from the Doro solo repertoire include “She’s Like Thunder” and “Burn It Up”.

At the end of the day, if you are not familiar with Doro‘s solo work or simply want to pick up a great DVD/CD, I highly recommend 25 Years In Rock… And Still Going Strong. There is also a second DVD showcasing a documentary on the 25th anniversary show as well as bonus footage including a few songs from events such as Wacken Open Air 2009 and Bang Your Head 2010. 25 Years In Rock… And Still Going Strong has led me on the path of discovering more of Doro‘s work and I have since picked up her latest release Raise Your Fist.