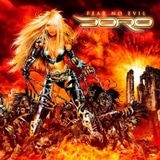 Review:
Slowly but surely Doro has been getting her second wind and delivering better and better albums with each release. After creating a few momentum busters throughout the years like Machine II Machine, Call Of The Wild and a number of compilations, the latter part of this decade has proven that she has a lot of creative fuel left in the tank. Doro has issued two of her strongest albums to date in Warrior Soul and now with the follow-up Fear No Evil.

Fear No Evil just might be the best album that Doro has released since going solo, I think that highly of this CD. If you’re looking for a balanced classic rock and metal attack you’ll find it here. There are no modern elements on this album aside from the bombastic sound and contemporary equipment used to capture the magnetic queen of metal laying down the most brilliant anthemic material she’s written this decade. The guitar work on Fear No Evil is a complete throwback to an era where guitar hero wasn’t the title of a video game, it was an essential component in rock and heavy metal.

Doro could have called this release ‘The Best Of Rocks and Ballads’, because it is. The standouts cuts are the opener “Night Of The Warlock”, “Running From The Devil”, a duet with Tarja Turunen called “Walking With The Angels” and “Celebrate” which contains a who’s who of female hard rock and metal singers with Saxon‘s Biff Byford coming along for the ride.