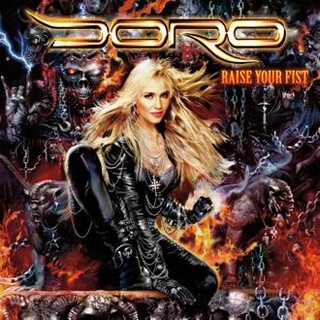 Review:
It’s not surprising to see Lemmy popping up on the song “It Still Hurts”, as Doro Pesch has become sort of a kindred spirit to the likes of Motorhead and AC/DC, reliably and punctually belting out known quantities of trad-metal every year or two to a loyal fanbase while picking up a handful of new adherents with each go around. She’s experimented with a few different styles here and there over the years, but for the most part she’s hewed closely to the brand of glam-infused power metal that she cut her teeth on with Warlock.

There’s little by way of experimentation on Raise Your Fist, a tight if fairly predictable epic of 13 full length tunes (15 on the digipak) — no interludes, no padding — that marks the twelfth Doro solo album since 1989 (if you find yourself behind the eightball on the solo back catalog might I recommend the 2CD Under My Skin collection released back in July on AFM Records). The only thing that will tip most people off that an act like Doro is still actively releasing singles will be the appellation ‘Album Version’ to a couple of these songs, but part of the charm of this material is that it’s still clearly being written for a nostalgic Headbanger’s Ball driven mainstream media that no longer exists — though many of us wish that it did.

“Raise Your Fist In The Air” is the first (and, so far, only) single, a radio-friendly rallying-the-troops anthem that used to be de rigueur on any ’80s metal album. With song titles like that and “Rock Till Death”, Doro is obviously not looking to challenge anyone lyrically — this is essentially good time party metal. Even when the topics turn somewhat serious — “Sealed In Blood (Human Rights)” and the aforementioned “It Still Hurts” — the lyrics are still largely appealing to pre-patterned emotions rather than inviting you to share anything too personal in the world of Doro Pesch. It might all feel a little disposable if the hooks weren’t consistently there, which they are… and in spades. One song that will no doubt become a fan favorite is “Hero”, dedicated to Ronnie James Dio, which is a string-laden AOR ballad largely in the Pat Benatar mold. Another standout, “Coldhearted Lover”, will please the hell out of fans of ’80s Heart or period glam like Vixen and Femme Fatale.

There’s little chance anyone reading this is completely unfamiliar with Doro‘s work, so to hardcore fans and fence sitters alike I offer reassurance that not only is this one of Pesch‘s best and most consistent albums in years, but it also never tests one’s patience with self-indulgent experimentation or inessential filler. Every song here was written with the clear intent of adding new classics to the Metal Queen’s back catalog, although which ones make the cut will vary individually depending on whether you’re more into the polished AOR, sentimental ballads and/or metallic rockers. You’ll find Doro‘s voice in peak form regardless.