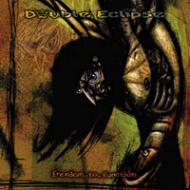 Review:
The English twins that make up Double Eclipse, Phillip and Alan
Hackney, have put together a very commendable sophomore album. Named after the
album by Hardline, the twins plays a heavier brand of rock
then their idols. Freedom To
Function is well produced, well played and has elements of decades long past
flowing throughout it.

If the previous comments of twins and great production led you to
think of Double Eclipse as a Nelson clone, get those thoughts out of your
head immediately! This album has more in common with the melodic styling of
underrated groups such as Badlands and Harem Scarem then the harmless
pop metal of Nelson. Freedom To Function wasn’t made for Top 40 radio;
it’s simply a good melodic rock album.

What sets Double Eclipse apart from other bands of this genre is
vocalist Phillip Hackney. The singer has a unique, almost forced vocal delivery,
which honestly reminds me of no one else in rock. It’s a voice similar in style to
Ozzy Osbourne, in which you will either love or hate it. Personally it has
grown on me like a bad weed, especially on slower tempo songs such as the seven-minute
epic “See You On The Other Side” and “Reason Why.” Check the group out at their
official website, and if you
like the vocals you’ll love this album.