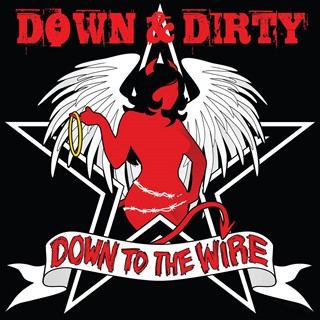 Review:
On their third studio album Down & Dirty stick to the party rock blueprint that they carved out on previous albums. Having said that, the Chicago natives do take a few more chances on Down To The Wire while showing a bit more maturity, right down to vocalist Stevie Ray Del Real dropping the Majyk moniker, but for the most part the youngsters deliver what their growing fan base have come to expect.

Right out of the gate Down & Dirty show off their chops with the fast paced rocker “Alive Tonight” — a song that would be the perfect live opener for years to come as it streams up and down the fretboard. “Everythings Shakin” is a slithery little number that takes several twists and turns with vocal changes and varying tempos, while the guitar solo propels “Get Lucky”, another strong rocker from the band. After the sleep inducing ballad “Rain” Down & Dirty return with one of Down To The Wire‘s hardest hitters, a full steam ahead rock song known as “Man Of The Times”.

The second half of Down To The Wire is hit or miss, but does keep the ’80s hair metal sound alive throughout. “Liquid Romance” succeeds with its gang chorus and the cover of “Trouble”, made famous by Elvis Presley and later Danzig, is done justice here. However the album ends on a bit of a whimper with the forgettable “Wicked Attitude” and the swinging “Bottom Line”, which goes uncredited on the liner notes.

If you enjoyed Down & Dirty‘s previous two releases you’ll be just as impressed with Down To The Wire. Stevie Ray Del Real adapts to certain songs and his voice changes throughout, as does the band’s music overall. While Down & Dirty have stayed true to their hair metal roots they decided to take a few chances on this release that probably was out of their comfort zone just a couple years ago.